India   All India  04 Jun 2018  Army called after violence escalates in Shillong over row between two groups
India, All India

Curfew has been imposed in many areas of Shillong after the recent violence was reported on Sunday night. 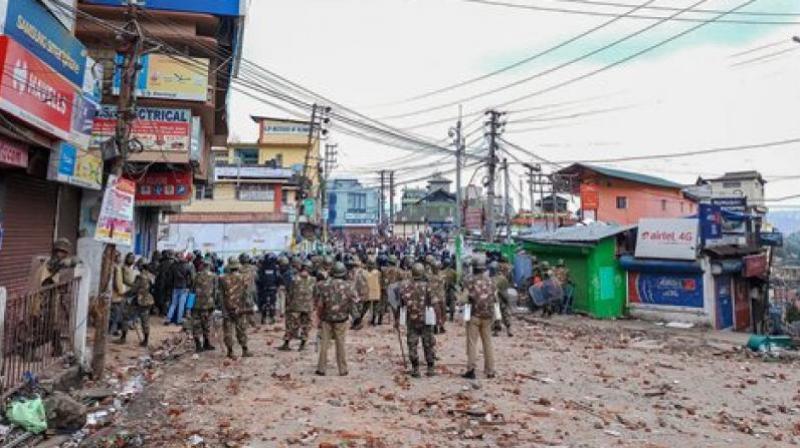 The forces have been sent to help the police maintain law and order in the Meghalaya capital. (Photo: PTI)

Shillong: Army has been called in for flag marches and the Ministry of Home Affairs has rushed 11 companies of para-military after fresh violence was reported in Shillong.

Curfew has been imposed in many areas of Shillong after the recent violence was reported on Sunday night.

The forces have been sent to help the police maintain law and order in the Meghalaya capital.

Fresh violence broke out in the city on Sunday night, prompting the police to use tear gas shells to control a mob.

Within hours after Meghalaya chief minister Conrad Sangma suspected a planed conspiracy behind the Shillong violence on Sunday, a mob of nearly 400 youths attacked a camp of the Central Reserve Police Force (CRPF) near the Mowlai bridge, prompting the security forces to use tear gas shells to quell the mob. The incident took place late in the night.

On Monday morning, a group of people also tried to protest in Shillong's Mawkhar area soon after a night-long curfew was over.

In the wake of prevailing tension and sporadic incidents of stone-pelting and violence, the state administration on Monday decided to extend the night curfew from 4 pm in some more areas of the capital town.

“Curfew has been imposed from 4 pm on Monday to 5 am on Tuesday in Shillong as there is likelihood that breach of peace may spread to other parts of the city,” said East Khasi Hills Deputy Commissioner P S Dkhar.

He also admitted that the situation is very tense in some areas. The administration has also decided to continue the suspension of mobile Internet services.

Violence broke out last Thursday after two groups of people in the city's Punjabi Line area clashed after a bus handyman was allegedly beaten up by a group of residents.

More than 10 people, including policemen, were injured in the violence.

Meanwhile, Meghalaya chief minister Conrad K Sangma who on Sunday said that there are certain people funding this agitation, on Monday convened an all-party meeting at Shillong and sought their help in restoring peace and tranquillity in the state. The meeting also discussed the prevailing situation.

Meghalaya home minister James Sangma appealed to people to stay calm and said that the government was doing everything to restore peace in the city.

“The agitators should stop protesting as the government has already met many of their demands, which included the arrest of the accused in the assault of the bus handyman on May 31,” he added.

After the attack on the camp of the CRPF, the Inspector General of CRPF Prakash D told reporters, “We request public not to take law in their hand and resolve the issue through talks.”

He, however, warned that they would be compelled to take stern steps if someone is found to have been taking the law into the hand.

More than 400 people were still taking shelter in a makeshift camp of the army at Garison Ground.

Concerned about reports of security threats in Punjabi Line area of Shillong, the Amarinder Singh government in Punjab has also sent a four-member team, headed by cabinet minister Sukhjinder Randhawa, to the Meghalaya capital, to assess the situation. Amarinder Singh has sought Meghalaya Chief Minister Sangma's cooperation in facilitating the team's visit.

However, tourists were not affected by the violence, it has caused anxiety among those scheduled to visit later during the month. The hoteliers of Shillong admitted that such incident may affect the flow of tourists to the state. “We hope that government will do its best to defuse the situation at the earliest,” said a hotelier.