Infiltration into J&K down 45 per cent since surgical strikes last September. 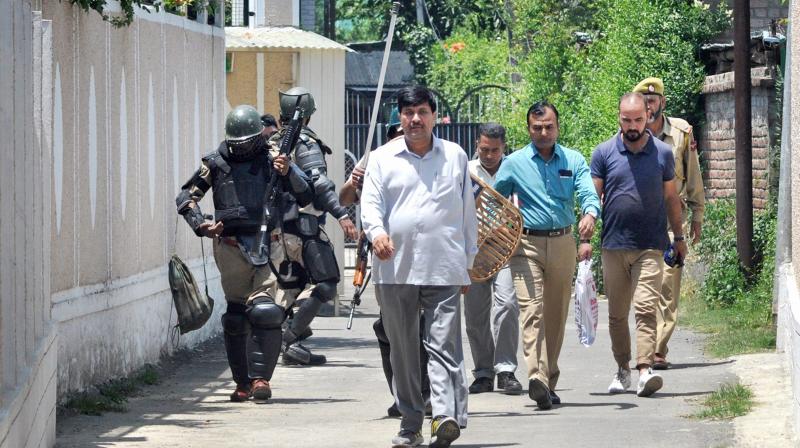 The officials of NIA after conducting raids in conection with terror funding recevied from Pakistan, in Srinagar. (Photo: AP)

New Delhi/Srinagar: The National Investigation Agency (NIA) on Saturday carried out raids at 23 places in Kashmir, Delhi and Haryana in connection with funding received from Pakistan for terror and violence in the Valley. The searches reinforced what Union home minister Rajnath Singh said a few hours later — that the Centre is determined to “uproot” Pakistan-sponsored terrorism from the Valley and that his government is working for a “permanent solution” to trouble-ridden Kashmir.

That time was ticking away for Kashmir’s separatists became somewhat evident when the NIA raided the premises of the relatives and close associates of Hurriyat hawk Syed Ali Shah Geelani, besides other leaders and functionaries of the outfit.

Speaking to reporters in Delhi, Mr Singh said, “We are working for a permanent solution. I have said this with utmost responsibility.”

Stating that the trouble in Kashmir has been brewing since Independence, he said the “solution to Kashmir may take some time, but we are working towards a solution”.

Searches and raids were carried out after registering an FIR. Separatists are allegedly receiving financial aid from Lashker-e-Tayyaba (LeT) chief Hafiz Saeed to carry out subversive activities, including stone-pelting, in Kashmir.

Meanwhile, the Enforcement Directorate (ED) issued fresh summons to separatist leader Shabir Shah in connection with a case of money laundering registered against him for alleged terror financing.

Sources revealed that the Centre was “no more interested” in “indulging” the separatists.

“It’s better they come to the table without any conditions whatsoever,” a senior government official said.

Mr Geelani had recently targeted the home minister who had said, “Kashmir is ours, Kashmiris are ours and Kashmiriyat is also ours.”

Aware that most Kashimiris “want peace, not azadi,” as was being projected by the separatists and a section of political leaders, the Centre has decided to crack down on Pakistan-sponsored subversive elements in Jammu and Kashmir.

On Thursday, Army Chief Bipin Rawat arrived in Kashmir to review the security situation and operational preparedness of the armed forces posted in the Valley and along the Line of Control. There has been speculation that the Centre was preparing to launch a massive operation to bring “peace” in the Valley.

Mr Singh, however, did not reveal any specifics and only said the government was working for a “comprehensive and integrated solution”.

While the Centre seemed to be zeroing in on the separatists, the minister did not rule out the possibility of a dialogue. “I have always been talking of holding talks. Anyone who comes forward to talk, we will talk,” he said and added, “problems can be resolved only through dialogue.”

“Whatever Naiduji said was correct,” Mr Singh said and asserted that all questions cannot be answered in “yes or no.”