The gangrape in moving bus in Delhi of a medical student, who came to be known as Nirbhaya, shook the nation in 2012. 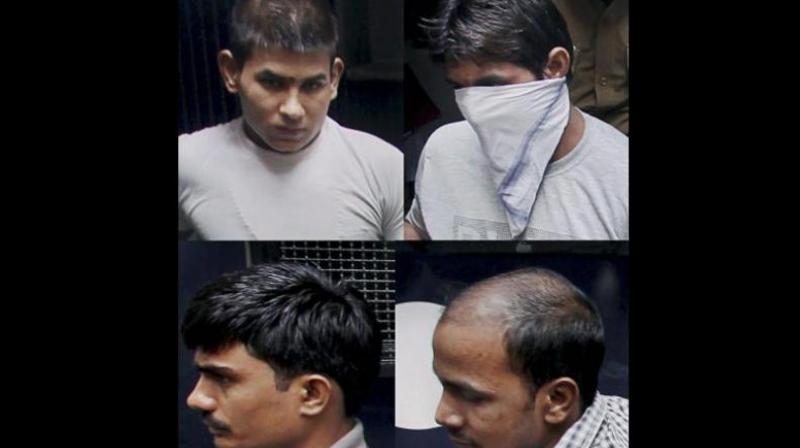 New Delhi: Four of the men who gangraped and tortured a paramedic student from Delhi on a moving bus in December 16, 2012, leaving the nation in shock and rage, asked the Supreme Court to spare them the death sentence as it was "cold-blooded killing in the name of Justice."

As the court reserved its verdict, there was no decision on Friday on the convicts' petition challenging their death sentence.

The Supreme Court on Friday reserved its verdict on the plea of two condemned convicts -- Vinay Sharma and Pawan Gupta -- who argued that they are "young and from poor families". The argument was rebutted by the public prosecutor.

The lawyer of the convicts, AP Singh claimed they were "not habitual offenders and have no criminal records, so the court must allow them to be reformed."

Singh also said the death penalty has been abolished in many countries. Execution kills criminals and not the crime, he argued. He also claimed his clients were underage when they were arrested.

The convicts told the Supreme Court that there were discrepancies in Nirbhaya's dying statements and she didn't name the accused.

Special Public Prosecutor Sidharth Luthra countered that all their arguments had been considered by the Supreme Court when it confirmed death sentence in May 2017.

The convicts had challenged the Delhi High Court order which had sentenced them to the gallows, after terming the December 16 incident as a "rarest of the rare" case.

Earlier, the trial court had also sentenced all the four convicts to the death penalty.

The paramedic student was gangraped on the intervening night of December 16-17, 2012 inside a moving bus in South Delhi by six people and severely assaulted before being thrown out on streets naked. The girl died of her injuries on December 29, 2012 at Mount Elizabeth Hospital in Singapore.

The incident led to big changes to laws on sexual crimes against women.

Another accused in the case, bus driver Ram Singh, had committed suicide in Tihar Jail, while a convicted juvenile, just days short of 18 he committed the crime, was sent to juvenile home. He has come out of the reformation home after serving a three-year term.

The victim, who died after battling for life for 16 days in hospital, came to be known as "Nirbhaya" or fearless. Her parents have said that all the rapists, including the youngest, should be hanged at the earliest.