A new feature introduced this year was a group photograph of award recipients with the President. 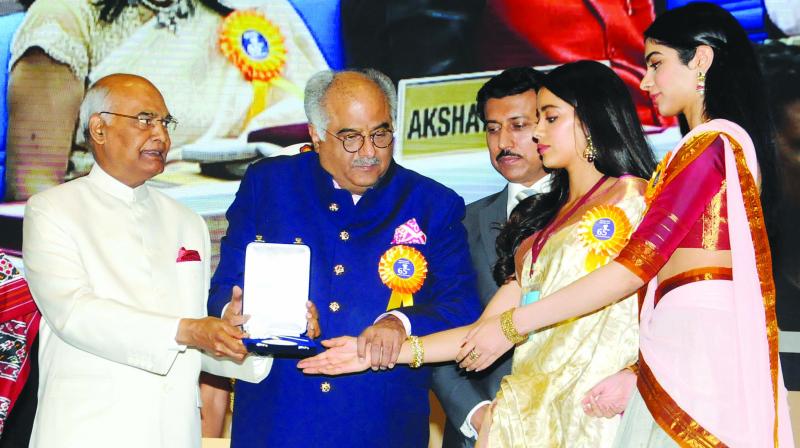 New Delhi: The 65th National Film Awards were held on Thursday evening with more than one-third of the recipients staying away from the prestigious ceremony as a mark of protest against President Ram Nath Kovind not giving away all the honours. Sources stated that approximately 55 recipients boycotted the Vigyan Bhawan ceremony while 80-odd received the awards, first from information and broadcasting ministers Smriti Irani and Col. Rajyavardhan Singh Rathore and later from the President.

The award ceremony passed off peacefully as the threats by some filmmakers of disrupting the proceedings or holding protests were thwarted by the timely intervention of the I&B ministry.

It is learnt that Shekhar Kapur and several other jury members were asked to present the government point of view to the awardees who were staying at Hotel Ashok in the national capital.

“The committee members were also informed that there was a need to maintain protocol and dignity of the President’s office. They were also told that as changes to the function could not be made at such a late stage, the filmmakers should find out an amicable solution to the issue,” sources said. They were also told that the Rashtrapati Bhavan had said that the President attends all award functions for a maximum of one hour, sources added.

It was for this reason that, for the first time ever, the awards ceremony was organised in two phases.

In the first phase awards were presented to the recipients by the two I&B ministers, and in the second phase the President conferred awards on 11 recipients — including Dada Saheb Phalke Award to Vinod Khanna for his contribution to the film industry. The award was received by his wife Kavita Khanna and his son Akshaye Khanna.

President Kovind also presented the award for best actress to Sridevi for Mom, which was received by her husband Boney Kapoor and daughters Khushi and Jahnvi.

While every year the National Film Awards is interspersed with songs selected from the awarded films, this year the ceremony was devoid of performances by any of the award recipients. There was also a 20-minute break between the two phases during which the audience was shown clips from the awarded movies. A new feature introduced this year was a group photograph of award recipients with the President.

The awards passed off without incident as, sources stated, the government roped in committee members earlier in the day to placate the agitated recipients.

About 66 awardees had threatened to boycott the ceremony with a signed letter of protest addressed to the Directorate of Film Festivals after they found out on Wednesday that President Kovind would hand over 11 only awards at the ceremony.