India   All India  04 May 2017  Killers took body parts of slain soldiers’ back to Pak, says India
India, All India 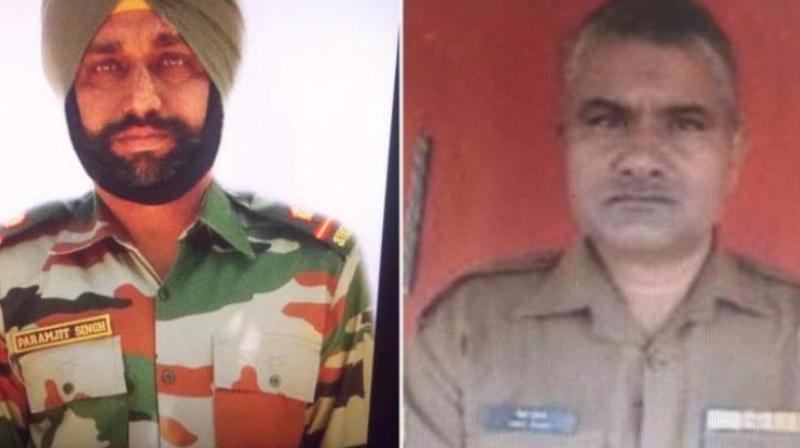 New Delhi: India on Wednesday issued a demarche to Pakistan, expressing outrage at the killing and mutilation of two soldiers, saying “it had sufficient evidence” that this act was committed by personnel of the Pakistan Army who crossed the Line of Control (LoC). India said, “The blood samples of the Indian soldiers and the trail of blood clearly show that the killers returned across the LoC.”

India also demanded that Pakistan take action against its soldiers and commanders responsible for this heinous act.

With the MEA saying that the “trail of blood is of Pakistanis, in this case personnel of Pakistan’s Army”, who came from across the LoC, the obvious meaning is that one or more Pakistan Armymen were also injured in the cross-border raid they carried out in the Krishna Ghati sector on May 1.

The MEA did not elaborate further, but it is also reliably learnt that blood from the severed body parts of the slain Indian soldiers was found in the blood trail leading upto the LoC, indicating that the returning Pakistani troops were taking them back with them.

BSF jawan Prem Sagar, who was martyred in Pakistan’s firing, was finally cremated after UP chief minister Yogi Adityanath called up the bereaved family and persuaded it to lay him to rest.

The ministry of external affairs (MEA) said, “The foreign secretary conveyed India’s outrage at the killing and barbaric act by Pakistan Army personnel.”

“It was conveyed that the government considers it a strong act of provocation and in contravention to all norms of civilised conduct. It is significant that the attack was preceded by covering fire by Pakistani posts in the Bhattal sector,” the MEA said.

“The foreign secretary mentioned to the Pakistan high commissioner that he should convey the sense of outrage on this particular incident to his government on this barbaric act and his response was, he denied that the Pakistan Army was involved in any way in this incident but assured that he will convey the contents of the demarche,” the MEA added.

Home minister Rajnath Singh also chaired a meeting with top security officials, including NSA Ajit Doval, after an alert that Pakistan-based terror groups may strike in other parts of India. Security was beefed-up at all vital installations, including airports.

Meanwhile, there were reports of a group of Pakistani schoolchildren on a trip to India returning earlier than planned after the MEA informed the NGO organisers that this was not the appropriate time for such a visit.