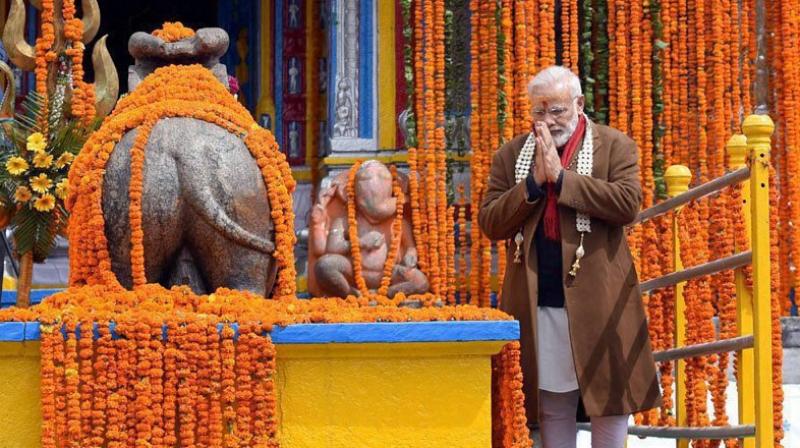 Dehradun: Spirituality, yoga advice and other wellness disciplines were on prime minister Narendra Modi’s agenda on Wednesday as he offered prayers at the Kedarnath shrine and then flew to controversial yoga guru Ramdev’s research institute in Haridwar.

The Prime Minister was the first visitor at the famed Himalayan shrine that opened its doors on Wednesday after a six-month winter break.

He also became the first prime minister to visit the Shiva temple after V.P. Singh in 1989.

Mr Modi, accompanied by Uttarakhand governor K.K. Paul and chief minister Trivendra Singh Rawat, arrived in an army chopper at the helipad built close to the temple and headed straight for the eighth century shrine located at a height of 11,755 ft near Chorabari Glacier.

Braving the early morning chill, around 4,000 devotees had turned up at the temple to witness its ceremonial opening and catch a glimpse of the prime minister, who performed a rudrabhishek (ritual bath of the Shiva lingam) in the sanctum sanctorum.

He did a “parikrama” of the Nandi statue outside the temple before walking through the crowds to make for the convoy that was to take him back to the helipad. An hour later, Mr Modi stepped into the chopper again to inaugurate Baba Ramdev’s research institute at Patanjali Yogpeeth.

Addressing the gathering, Mr Modi rued that successive governments had sought to forget India’s traditional medicinal systems instead of promoting them. Patanjali promotes its products as home-grown alternatives to Western products.

“In the pre-independence era, the gems of our traditional systems of medicine and healthcare were deliberately kept under wraps because we were a slave country. But even in the post-independence era, unfortunately, there was an effort on the part of successive governments to forget the distinctive specialities of our traditional systems rather than promoting them,” Mr Modi said.

He congratulated Baba Ramdev for the research institute and for taking yoga “to every household across the world”.

Baba Ramdev conferred the title of “Rashtra Rishi” on Mr Modi for his “relentless efforts to build a clean, strong and united India”.