India   All India  04 May 2017  If Muslims want no compromise, court will resolve Ram Temple dispute: Swamy
India, All India

The AIMPLB has already rejected the Supreme Court's suggestion for an out-of-court settlement of the Ram Temple dispute. 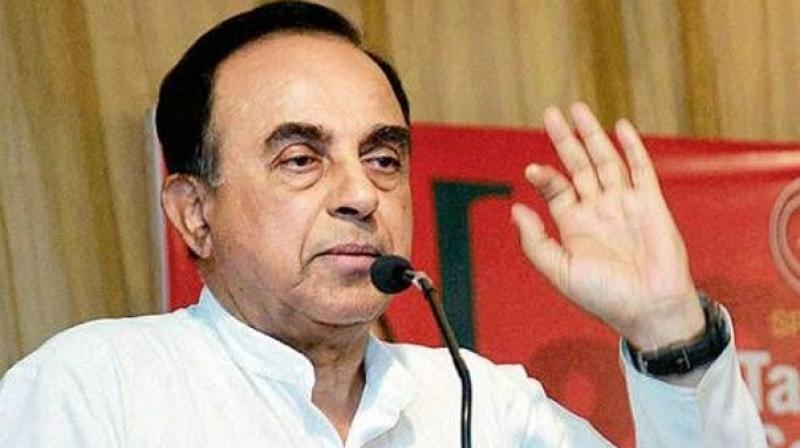 Lucknow: If Muslims do not want a compromise on the Ram Temple issue, the court is there to resolve the land dispute in Ayodhya, BJP leader Subramanian Swamy on Thursday said, drawing sharp retort from the Babri Masjid Action Committee.

"If they don't want a compromise, the court is there...We have already won in the Allahabad High Court, which has ruled that Lord Rama was born at a place of central dome as per faith.

"If you talk of Hindu-Muslim unity, a mosque can be constructed anywhere, but it cannot be constructed where Lord Rama took birth," Swamy, also a Rajya Sabha MP, told reporters after his meeting with Uttar Pradesh Chief Minister Yogi Adityanath in Lucknow, sounding confident of legal victory in the matter.

He, however, declined to divulge what transpired at his meeting with Adityanath, a hardline Hindutva leader and vocal proponent of the temple.

"There was a temple where a mosque was constructed...The clerics, who are adamant, should know that," Swamy said.

"There is a way (of settlement) through the Supreme Court. I have a fundamental right under Article 25 of the Constitution to worship at the place of my faith. I am fighting for my fundamental right, while they are fighting for property right," he said, sounding confident of legal victory.

When asked how a settlement could be reached when both the parties were not in agreement, he said, "Samjhauta nahi karna chahte hain to phir court to hai hi (If they don't want to compromise, then the court is there to resolve the issue)".

However, convenor of Babri Masjid Action Committee (BMAC) Zafaryab Zilani, when asked to comment on the matter, said, "Swamy should not threaten Muslims. We have faith in judiciary and we are law-abiding citizens and will respect whatever the court rules."

"With Prime Minister Narendra Modi and Uttar Pradesh Chief Minister Yogi Adityanath at the helm of affairs, there is no hope that justice will prevail with the Muslims. Both of them have been BJP workers and supporters of Ram temple movement," Zilani had earlier said.

Swamy had recently urged the Muslim community to support construction of the Ram Temple at the disputed Ram Janmabhoomi-Babri Masjid site in Ayodhya.

"Ram temple can only be built at one place in Ayodhya where the structure of a temple was found at the disputed site following investigation by the Archaeological Survey of
India," Swamy had said.

The BJP MP claimed that the Allahabad High Court had made it clear that the structure of a temple was found at the disputed site.

In September 2010, a three-judge Lucknow bench of the Allahabad high court had stated that Lord Rama was born under the central dome of the makeshift temple and Hindus have the right to worship there.

Subsequently, the apex court had stayed the implementation of the HC decision. The case is pending since then.

"Babri Masjid was built after the temple was demolished and the Hindu community has been demanding construction of the Ram temple for a long time," Swamy had said.

"If the issue is settled amicably, it will be all right, otherwise we will enact a law to construct a grand Ram temple in Ayodhya when we get majority in the Rajya Sabha by April, 2018," he had asserted.

Swamy, who was asked by the Supreme Court to talk to all parties in the dispute, said he had discussions with Muslim leaders -- AIMIM president Asaduddin Owaisi and Babri Masjid Action Committee convener Zafaryab Jilani -- over the issue.

"The Muslim leaders did not agree to a bilateral negotiation but wanted mediation of the Supreme Court," he had said.

The All India Muslim Personal Law Board (AIMPLB) has already rejected the Supreme Court's suggestion for an out-of-court settlement of the Ram Janmabhoomi-Babri Masjid
dispute and said that only a verdict by the apex court will be acceptable to it.

"No out-of-court settlement is acceptable to us," AIMPLB General Secretary Maulana Wali Rehmani has said.

On March 21, the apex court had suggested an out-of-court settlement of the dispute at Ayodhya, observing that issues of "religion and sentiments" can be best resolved through talks.