India   All India  04 Apr 2019  US set to sell India advanced copters to hunt submarines at sea
India, All India

The Indian Navy has been seeking these helicopters on an urgent basis. 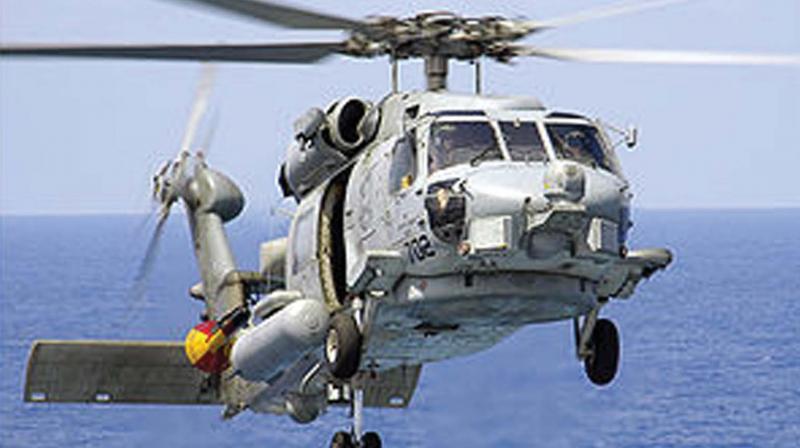 The US Navy has deployed these helicopters as its primary anti-submarine warfare and anti-surface weapons system.

New Delhi: India is expected to soon get one of the most advanced naval helicopters capable of hunting submarines in the sea and launching anti-surface missions. The US state department has approved the sale to India of 24 MH-60R multi-mission helicopters for an estimated cost of $2.6 billion.

The Indian Navy has been seeking these helicopters on an urgent basis. At present, India uses the old British Sea King helicopters, which are around half a century old.

The United States said the proposed sale will support the foreign policy and national security of the US by helping strengthen “US-Indian strategic relationships and to improve the security of a major defence partner which continues to be an important force for political stability, peace and economic progress in the Indo-Pacific and South Asia region”.

“India will use the enhanced capability as a deterrent to regional threats and to strengthen its homeland defence,” the US government said in a statement. It said the proposed sale of “this equipment and support will not alter the basic military balance in the region”.

The helicopter has been designed to hunt submarines as well as knocking out ships and conducting search-and-rescue operations at sea. These are built by Lockheed Martin and is the most capable naval helicopter available today, designed to operate from frigates, destroyers, cruisers and aircraft-carriers.

Under the US defence department notification, the helicopters will be equipped with Hellfire missiles, Raytheon MK 54 torpedoes and BAE Systems Advanced Precision Kill Weapons System laser-guided rockets. There will be M-240D and GAU-21 crew-served machine-guns, night vision devices and identification friend or foe transponders. Along with these, there will be Kongsberg Naval Strike Missile emulators and captive inert training missiles, although not the missiles themselves.

The US Navy has deployed these helicopters as its primary anti-submarine warfare and anti-surface weapons system.