Recently on March 1, a young Indian medical student, Naveen SG of Karnataka, was killed in shelling 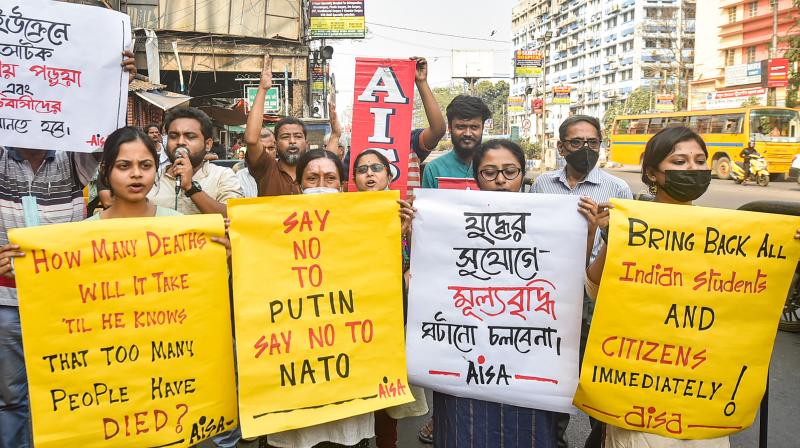 AISA activists display banners seeking immediate return of all Indian nationals from war-torn Ukraine, during a protest against the Russia-Ukraine war, in Kolkata. (Photo: PTI)

New Delhi: An Indian student has reportedly been shot at and injured in Ukrainian capital Kyiv, Minister of State for Civil Aviation V K Singh said on Friday.

Singh is in Poland currently to facilitate the evacuation of Indians stranded in war-hit Ukraine.

"Today, we heard reports that a student leaving Kyiv was shot at. He was taken back to Kyiv. This will happen in a fighting," the minister told media persons.

Recently on March 1, a young Indian medical student, Naveen SG of Karnataka, was killed in shelling in the Ukrainian city of Kharkiv when he ventured out to buy food for himself and fellow students.

Singh said the Centre is making efforts to ensure that the maximum number of students can come out of Ukraine with as less loss as possible.