India   All India  04 Mar 2020  Weaponisation of hate is despicable
India, All India

Weaponisation of hate is despicable

The scale of uncivilised violence in it cannot be imagined. 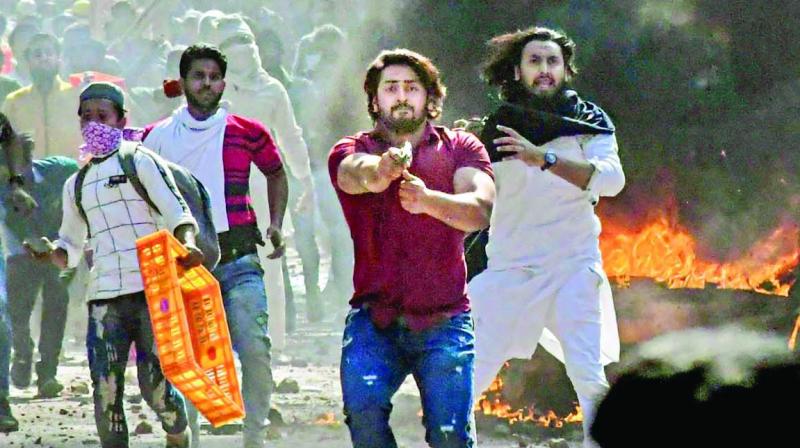 (Photo for representation purpose only)

The weaponisation of hate is the most despicable aspect of India's politics. The worst of religious bloodletting came back in the latest bout of four bloody days in the capital, with the worst horrors of pogroms of the modern age in India of 1984 and 2002 in evidence again. Those of us born in independent India have not had to live through the time of the world's greatest forced migration of modern times, which Partition was, engineered by the British policy of divide and rule. The scale of uncivilised violence in it cannot be imagined.

Truth to tell, modern day Hindu nationalists have managed to bring back the horrors on a miniature scale, taking fewer lives but impacting millions of people across the religious divide. A number of eminent persons have said that they do not feel like living in India anymore. A Supreme Court judge aired that opinion recently. Millions of others may also say it though they can't help being tied down to their country. Where can any of us go?

The violence was not perpetrated only by the Hindu hardliners, but they must take the blame for starting it. What may have acted as triggers were the hate speeches about which we have done nothing for several years and the result was an open civil war type of situation for four days in north eastern parts of the capital.

If anyone stands up to power, he is shooed off or shown the door, like the intrepid judge of impeccable integrity in Justice S. Muralidhar who dared question the hate speeches of three BJP leaders, and had them played back in court too for those who said they had not had the time to view them.  “There are so many TVs in your office, how can a police officer say that he hasn't watched the videos? I'm really appalled by the state of affairs of the Delhi Police,” he had thundered and rightly so as no establishment personality could have given a weaker excuse for not viewing vital evidence.

The scholarly judge is likely to say only a few words in private gatherings. It is in the principled views he takes on issues from the Bench and pronounces seminal judgments that set him apart. And now Muralidhar has become a cult figure from the Bench & Bar, a modern day judge of the Giovanni Falcone kind who stood up to the Sicilian Mafia. It seemed appropriate then that an internet meme had Justice Muralidhar in a Superman costume with the scales of justice drawn under his legal lapel and saying - “We can’t let another 1984 happen in this city, not under the watch of this court.”

Justice Muralidhar had shamed the Solicitor-General so much in court that a midnight order was all the government could to retaliate in the manner of an offended school kid striking back. Such pettiness seems even smaller after the mobs had unleashed violence while the cops looked away, and perhaps joined the mob too on occasion instead of crushing the riot. This was no spontaneous uprising as in the Yellow Vest movement in France where workers rampaged for weeks together or in Hong Kong where anger against the government was being consistently demonstrated.

The Delhi HC Bench that heard the matter the next day decided that the situation was not conducive for registering FIRs against hate speech. How much longer will we carry on as a society believing that hate speech does not stoke the divide and invite violence? It is also clear that politicians of all hues use hate speech.

The ‘honours list’, post the CAA, includes - Anurag Thakur, Kapil Mishra, Parvesh Verma and Abhay Verma, all BJP leaders named by the Delhi HC, besides many like Waris Pathan, Sharjeel Imam and other leaders, including Asaduddin Owaisi, who have at various times indulged in such rhetoric.

The number of offenders is long and includes many more from the ruling party too. As a nation we have been sanctimonious in condemning hate speech but done very little to act against it, whether it is in social media or in public speeches.

A ban running into a few days from campaigning is all that the ECI can hand out at times of polls. It is up to the keepers of the law to keep surveillance against hate speech and bring the offenders to book as a daily task.

The communal nature of the riots is not hidden by the mixed bag of victims, with both sides suffering losses, the Muslims a little more so. The point is most of the orchestrated violence was aimed against opposing communities by both sides earmarking properties and fighting a pitched battle war with suitable weapons. And, unusually, there were many with bullet injuries in a country in which personal firearms are not all that common.

People will lick their wounds and move on simply because life warrants it.

The recrudescence of violence has, however, left scars which will not heal for a long time.  Violence only begets violence but try saying that in India where common sense is allowed very little relevance.

R. Mohan is the Resident Editor of the Chennai and Tamil Nadu editions of Deccan Chronicle