It is significant that non-inclusion of a person’s name in the NRC does not by itself amount to being declared a foreigner. 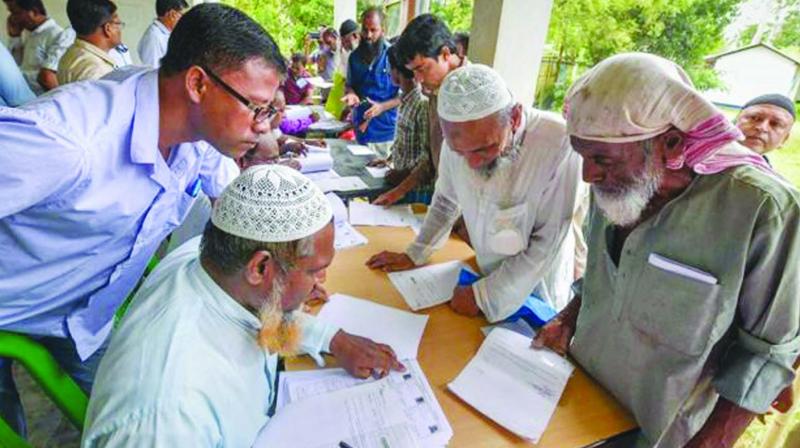 A file photo of Assam residents filing documents as part of the process for updation of the National Register of Citizens.

Guwahati: The NRC authority has started exercise of issuing “rejection slip” to over 19 lakh people excluded from the National Register of Citizens (NRC) in Assam.

Informing that process of handing over the rejection slip is expected to start from March 20, parliamentary affairs minister Chandra Mohan Patowary in a written reply to a question in the Assam assembly said that the rejection slip will mention the reasons for excluding a person’s name from the final NRC.

It is significant that non-inclusion of a person’s name in the NRC does not by itself amount to  being declared a foreigner. Such individuals will be issued the rejection slip with which they can approach the Foreigners Tribunal within 120 days.  If one loses the case in the tribunal, the person can move the high court and, then, the Supreme Court to prove his or her citizenship. In Assam, one of the basic criteria for inclusion of names in the NRC was that the names of applicant’s family members should either be in the first NRC prepared in 1951 or in the electoral rolls up to March 24, 1971.

Other than that, applicants also had the option to present documents such as refugee registration certificate, birth certificate, LIC policy, land and tenancy records, citizenship certificate,  passport,  government issued licence or certificate, bank/post office accounts, permanent residential certificate, government employment certificate, educational certificate and court records issued prior to 1971. Pointing out that at present, work related to scanning of “speaking order” is going on and about 12 per cent job is left, Mr Patowary, in his written reply to Congress MLA Rekibuddin Ahmed, said that as soon as remaining works are completed there is plan to start issuing the rejection slip from March 20.

In a separate query by Congress MLA Abul Kalam Rasheed Alam, Mr Patowary said that a total of Rs 1,348.13 crore have been allotted for the NRC update work.

The final NRC was published on August 31 last year by excluding 19,06,657 persons. A total of 3,11,21,004 names were included out of 3,30,27,661 applicants. The final NRC was published on August 31 last year by excluding 19,06,657 persons. Before publishing the final NRC, the Centre had extended the time limit for filing of appeals in Foreigners Tribunals with the Rejection Slips by the excluded people to 120 days from 60 days and necessary amendments were made. However, the process got inordinately delayed with ruling BJP questioning the veracity of the NRC. The final National Register of Citizens in Assam was published on August 31, 2019, which was prepared under the supervision of the Supreme Court of India. This is an updated NRC from the original which was published in 1951. The NRC has been prepared under the Section 4A of the Citizenship (Registration of Citizens and Issue of National Identity Cards) Rules, 2003, which provides for a separate citizenship law for Assam which is different from the rest of the country. The cut of date for inclusion was the midnight of March 24, 1971.