India   All India  04 Mar 2020  Kumudini Lakhia, dancer who gave the body of Kathak a new mind
India, All India

Kumudini Lakhia, dancer who gave the body of Kathak a new mind 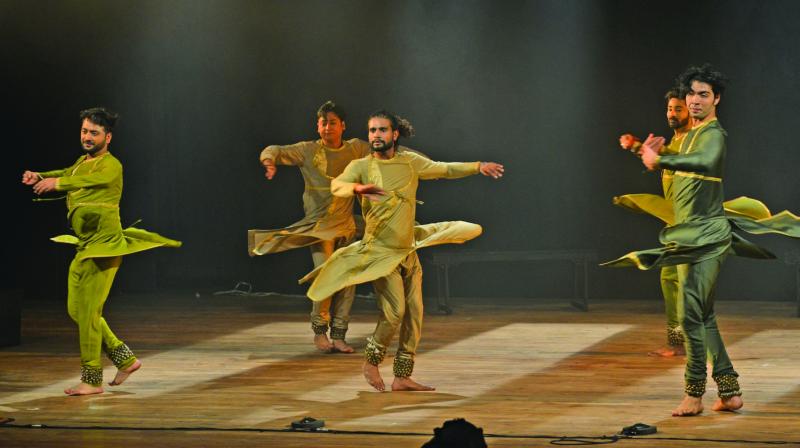 Visual vignettes from the show

The legacy of gharanedhar gurus had invested Kathak with a rich body of technique. Dancer-choreographer Kumudini Lakhia gave this body a new mind. It was a milestone for Kathak aficionados when Ahmedabad’s prestigious Kathak institution, Kadamb, mounted the two-day festival, Yugaantar, in celebration of its founder Kumudini Lakhia’s 90th birthday, marking her completing 60 eventful years of teaching Kathak, in the process enriching the dance with several fine performer/teacher disciples.

When in 1961, Kumudini with a very young son Shriraj in tow, arrived in Ahmedabad along with husband Rajnikant, a lover of Hindustani music, working with the family’s Lakhia brothers automobile dealership, the city, a stranger to Kathak, could offer no tabla player, an absolute necessity for the dance. Kumudini managed with a hired percussion student who would provide what support he could, with Kumudini clapping and loudly vocalising the rhythmic syllables! In the small office space, Rajnikant helped remove all the tyres etc. after the day’s work to turn the floor space into an evening dance class. Aditi Mangaldas, an established contemporary Kathak performer now, was Kumudini’s first student along with two other less committed learners. In 1962, she acquired a student Sandhya, whose husband Atul, well-versed in music, after days of quietly taking in the proceedings in the Kathak class, became Kumudini’s music composer and there began one of the greatest explorations between Kathak dance and music spread over 35 years, among two combustible and volatile, but in the final analysis, creatively like-minded people. Atul, who was acutely sensitive to the musicality in each movement, through his raga compositions sans words, seemed to heighten the impact of the dance visualised by Kumudini Lakhia. It was as if melody and movement were in constant interaction, one influencing the other-both equally innovative. Kumudini’s  no-nonsense approach got the right seasoning from Atul Desai’s abstract soaring into the world of notes and sound — the two together creating sheer poetry of movement and sound.

Having been a dancer travelling the world in Ramgopal’s dance troupe, Kumudini was aware of the need for presentational elegance in Kathak, without the ornate trappings and spectacle for western audiences which Ramgopal created.

Kadamb Centre came into existence in 1967. The name Kadamb itself, a tree replete with Krishna associations, scented blossoms and aesthetic appeal showed Kumudini’s poetic mind, which jostled with thoughts she wanted to sculpt through Kathak movement. The traditional movement technique when used to drape themes away from mythology, acquired a different magic. Her Guru Shambho Maharaj had instilled in her a feel for the supreme aesthetics of Kathak, though her idea of the proudly straight dancer’s body with a regal bearing was far from the way the guru stressed a modest, eyes-down stance of humility. Preferring well-fitting costumes in pleasing shades, sans the fussy veil and ornaments (which invariably came in the way during chakkars and fast movements), Kumudini’s concern was more with the dancer in space and the group form rather than the frontal facing solo dancer performing to the audience. Movements pared down to their micro elements, were reassembled for a group of dancers facing different angles, often with overlapping movements — where riveting formations were created sometimes in a dynamo effect – different from the customary synchronicity. So dance really took place in the space between bodies. A ‘tukra’ or ‘tihai’ treated this way as an assemblage among several dancers, without the customary traditional solo fashion of sticking to centre space, had a new feel. Minimalism without overcrowded virtuosity became the rule and even simple hand movements “tat thai, tat tatthai” by three dancers facing different angles filled space with beautiful lines.

‘Dhabkar’, with three superbly trained dancers in simple elegance seated at different levels of stage space, with wonderful lighting, made just a foot-stomping rhythmic sound like the pulse beat. This curtainraiser reminded one of the days when purists caviled at such play on rhythmic syllables, ultimately coming to accept that Kumudini had shown how hidden in known rhythm patterns, was a wealth of ideas.

With a set of male performers, ‘Padhant’ built round the plain recitation of bols created an interaction like jawabsawal with performers seated at one point in a durbar style of exchange — the speed and  manner of utterance creating real theatre, suggesting shades of emotion.

Tarana in Durbari (a 2009 production), melodiously sung in the sound tape by Aniketh Khandekar had strong male dancers, matched by female dancers doing high leaps. Light and strong tones of footwork with subtle distribution of weight, depending on the part of the foot marking the rhythm on the floor, was delightful.

Aditi Mangaldas, one of Kumudini’s prime students, presented abstracts of her larger work, Immersed — the dancer fathoming what Krishna, serenaded in sculpture, poetry, dance, music, architecture and literature, means to her. Calling out to him through innumerable epithets, she wonders at his cosmic immensity. “You are life and the breath that governs me.” She yearns to partake of his micro-essence in all forms – the prancing deer, the soaring bird or the fish exploring the ocean depths. Along with Milind Srivastava’s light effects were melodious voices of Shubha Mudgal and Aneesh Pradhan, in ragas like Maand and Sohini. Apart from Bhartendu Harishchandra’s “Savare chhaila re”, were soliloquy passages with the dancer reciting Cheetswami’s poetry, “Aage Krishna, Pachhe Krishna”. Aditi’s choreography and presentation bringing into play all the abstract elements of Kathak she excels in, woven into the dance fabric, with padhant, tabla and Pakhawaj by Mohit Gangani and Ashish Gangani. In the swelling and fading away of the ghungroo ki awaz, it was a dancer who touched silence — on this auspicious day — the birthday of both Kumudini Lakhia and Pandit Birju Maharaj — her gurus!  It was an immersive performance.

A true index of Lakhia’s teaching achievements lay in the superbly conceived Samaratri presented by disciple Aditi’s disciple Gauri Diwakar who surprised with the maturity of her sensitive dance interpretation of Kalidas’ erotic verses from Kumarasambhavam, helped by inputs from Vigyan Bhairav Tantra on Bhairava and Bhairavi. Bride Parvati’s imagination runs riot — comparing creepers to snakes round Shiva’s body, juxtaposing her sandal-pasted body against his ash-smeared one, her lustrous hair against his locks on which Ganga perches. On that perfect Shivaratri is it Shiva in search of Shiva, as seated on Shiva’s lap, Parvati asks about the truth of Shiva — Kim rupamtatvato? Is he form subsumed in the formless? On the perfect night in the beloved’s embrace (the fully awakened senses likened to the five colours of the peacock’s tail) so sensitised that Parvati feels the ecstatic thrill of an ant moving on her body, she discovers that Shivaratri’s eternal darkness (superior to the Light which burns itself out) presides overduality transcended and between Prana and Apana, Parvati experiences the reality — of herself in Shiva. The delicacy of Gowri’s interpretation and the impactful music composed by Samiullah Khan (singing in full throated gusto) revealed a dancer who had found herself.