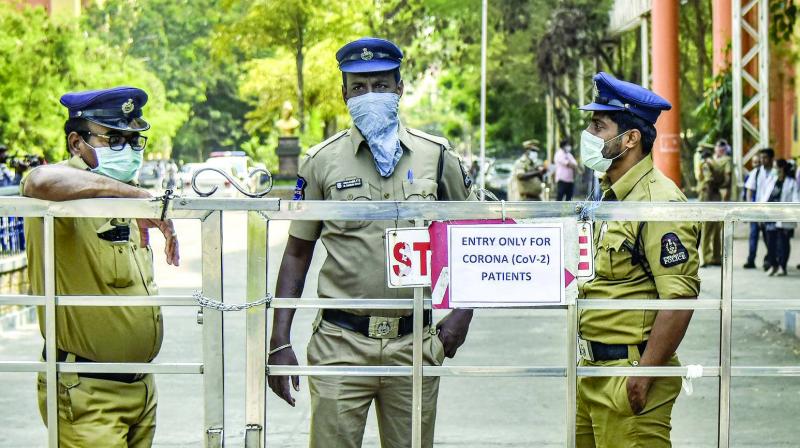 New Delhi: India on Tuesday confirmed its sixth case of coronavirus when the test results of a 69-year-old Italian tourist were confirmed to be positive.

Officials said the sample of the Italian in Jaipur, which was sent to National Institute of Virology, Pune, was found to be positive after the first two tests gave contradictory results.

Hours later, his wife was also found to have been infected with the deadly virus. However, her case is not confirmed yet with officials of the Rajastha Health Department saying the samples are being sent to Pune for another test.

The couple has been kept in isolation at Jaipur’s Sawai Man Singh Hospital.

Twenty-one Italian tourists and three Indian tour operators, who were in the same group as the couple, have been sent to an ITBP quarantine facility in Delhi on Tuesday for suspected coronavirus exposure, official sources said.

With this, six cases of COVID-19 have been reported in the country so far. Though three of the patients in Kerala have recovered, the virus has infected more than 89,000 people in over 60 countries, and killed more than 3,000 people in around 8 countries.

Concerned over the spread of the virus, India on Tuesday suspended all regular visas/e-visas granted to nationals of Italy, Iran, South Korea and Japan that were issued on or before Tuesday (March 3) and those who have not yet entered India.

The Union health ministry said nationals of these countries would have to seek fresh visas if they want to enter India in case there is a “compelling” need to travel here.

However, “diplomats, officials of UN and other international bodies, OCI cardholders and aircrew from above countries” have been “exempted from such restriction on entry” but “their medical screening is compulsory”, the health ministry said.

Aviation regulator DGCA said that airports and airlines must ensure that each aircraft arriving from South Korea, Japan and Italy is subjected to disinfection process before boarding begins for the next flight.

154 on February 25, asking all passengers on the flight to follow the protocol laid out by the health ministry.

“Indian citizens are advised to refrain from travel to China, Iran, Republic of Korea (South Korea), Italy and advised to avoid non-essential travel to other COVID-19 affected countries,” it added.

The DGCA on Tuesday asked airlines and airports to take specific measures such as providing protective gear like surgical masks and gloves to crew members and passengers and having multiple hand sanitising points in terminals.

“All ground handling staff entering inbound and outbound international flights shall be provided with personnel protective equipment (PPEs) and such PPEs shall be disposed of in an appropriate manner after each flight,” the DGCA circular said. PPEs stand for protective gear like surgical masks, gloves, disposable shoe cover.

The government had on Monday confirmed two fresh cases of coronavirus in the country, one in Delhi and one in Telangana, that had taken the total number of confirmed cases so far in India.

“One positive case of COVID-19 has been detected in New Delhi, and one has been detected in Telangana. The person from Delhi has a travel history from Italy, while the one from Telangana has a travel history from Dubai. Further details of his travels are being ascertained. Both the patients are stable and being closely monitored,” the government had said.