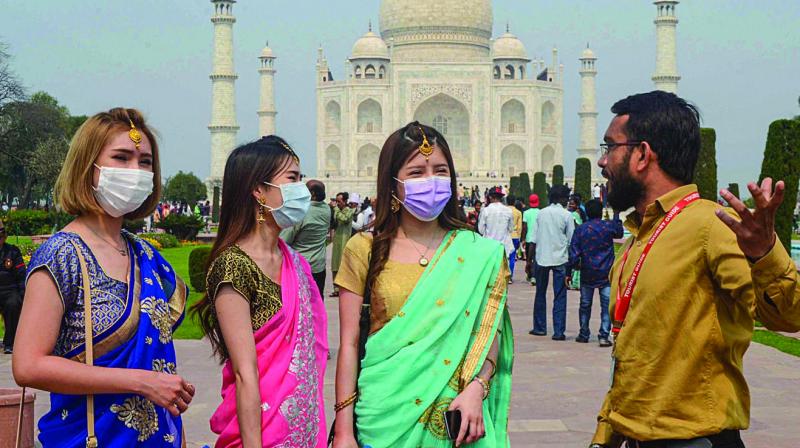 Tourist wear protective masks in wake of the deadly novel coronavirus at Taj Mahal in Agra on Tuesday. (Photo: PTI)

New Delhi: A day after a Delhi man was found positive for the deadly coronavirus, six of his family members, whom he met in Agra, have been quarantined. They have also been kept in isolation at Delhi’s Safdarjung hospital.

In neighbouring Noida, two private schools cancelled classes for the next few days as a precautionary measure after the father of a student tested positive for coronavirus.

The Delhi government, meanwhile, is taking all possible steps to deal with the novel coronavirus and is trying to get in touch with those who could be infected or were in contact with the infected man.

Addressing a press conference, Mr Jain, flanked by deputy chief minister Manish Sisodia, said: “COVID-19 is a new infection, but there is no need to panic. We are taking all possible steps to keep Delhi safe. Isolation wards are being readied in 25 hospitals, including 19 government and six private hospitals. As many as 3.5 lakh N95 masks have been arranged. We have over 8,000 separation kits for staff treating coronavirus patients.”

The two schools announced their closure in messages sent to parents, a day after the Union health ministry reported two fresh cases of coronavirus — one of them in Delhi.

One of the schools, where the Delhi-based man’s son is a primary class student, said it will remain shut from March 4 to March 6. He had thrown a birthday party last week for the child, triggering fear that the students who attended it might be at risk.

Earlier in the day, the school said it was postponing internal examinations scheduled for Tuesday due to some unavoidable circumstances. The board exams are not affected, the messages sent to the parents made clear. The second school said it is suspending classes from now to March 9 and sanitising its campus. Fumigation was underway at both schools. A health department team led by Noida’s chief medical officer visited one of the schools on Tuesday morning.

Meanwhile, some family members of the coronavirus infected Delhi-based man were shifted to Safdarjung hospital for tests after they showed symptoms of the virus. Some other relatives were asked to remain quarantined at their homes.

Health ministry sources said these foreigners, 13 women and eight men, were in the same group of which an Italian and his wife have tested positive in Rajasthan capital Jaipur.

“His (Italian in Jaipur) condition is stable,” a source said.