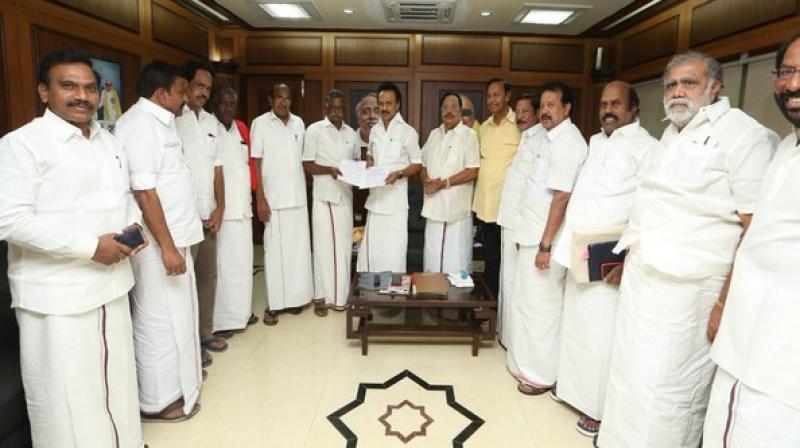 CPI state secretary R. Mutharasan and DMK President MK Stalin have signed the seat sharing agreement on two constituencies, ahead of the polls.

Earlier in the day, Viduthalai Chiruthaigal Katchi (VCK) founder-leader Thol Thirumavalavan announced that his party has reached an agreement with DMK for two constituencies for the forthcoming general elections.

Thirumavalavan told ANI, "We made an agreement with DMK for two constituencies in forthcoming parliamentary elections. We will decide on what are those constituencies after a couple of days. Now we fixed only on the numbers, peacefully and happily."

DMK president MK Stalin last month announced to give 10 Lok Sabha seats to Congress in Tamil Nadu including Puducherry wherein all 40 seats are at stake.

Meanwhile, Union Minister and BJP leader Piyush Goyal in Tamil Nadu's Thoothukudi said, "On March 6, we will have a grand meeting of BJP-AIADMK-PMK alliance near Chennai. Prime Minister Narendra Modi will attend the meeting along with Tamil Nadu Chief Minister Edappadi K. Palaniswami, Deputy Chief Minister O Panneerselvam, the PMK leaders and several other leaders will share the stage."

BJP has announced it will fight the coming General Elections in alliance with the AIADMK in Tamil Nadu and Puducherry.

AIADMK said on February 19 said that the BJP would contest five Lok Sabha seats in Tamil Nadu and the lone seat of Puducherry.

PMK, which has a strong vote base in northern Tamil Nadu, especially among the OBC Vanniyar community, will contest six Lok Sabha seats and will get one Rajya Sabha seat.

In 2014 Lok Sabha elections, AIADMK won 37 seats in Tamil Nadu while the BJP-DMK alliance had won only two seats.

In the 235-member Assembly, the AIADMK has 115 members followed by DMK 88, Congress eight, IUML and independent one each, while 20 seats are lying vacant on account of the disqualification of 18 members and the death of two MLAs.