Flags of the outfit first appeared in Srinagar during 2014 stone-pelting. 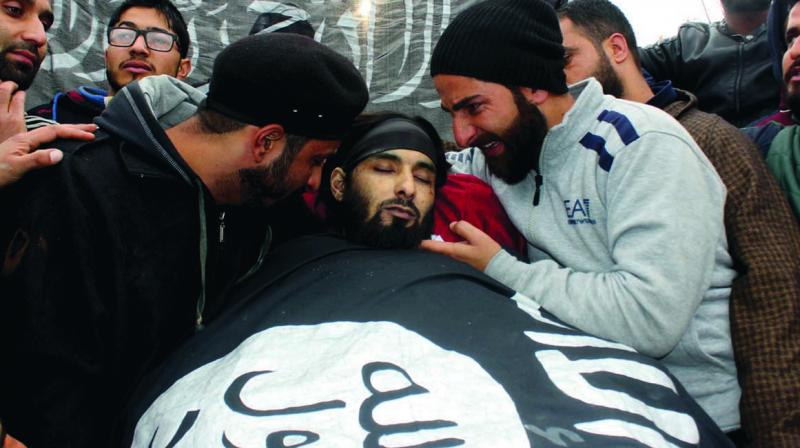 Funeral of militant Mughees Mir whose body was wrapped in an IS flag in Parimpora. (Photo: H.U. Naqash)

Srinagar: Has the Islamic State (ISIS) made inroads into Jammu and Kashmir after attracting local militants to its ideology? Security forces are still looking for an answer to this question after the ISIS owned responsibility for a recent attack in which a cop was killed in Srinagar.

The Union home ministry has asked for a thorough scrutiny of the issue following which the J&K police has roped in some experts to dive deep into the claim. Also a special probe team is investigating the February 25 incident.

A police officer said, “Our team is trying to find out if the militant who shot cop Farooq Ahmed is actually an ISIS enlist or someone who has tried to play it up by linking it with the ISIS.”

The slain policeman was guarding the residence of Fazal-ul-Haq Qureshi, a leader of separatist Hurriyat Conference faction, when he was shot dead from point blank range by a lone gunman. The assailant also stole Ahmed's service weapon. The police claims that it knows the identity of the assassin and is on his trail. “We’re trying to find out if it was an act by some local militant influenced by the ISIS ideology the way Zakir Musa (former Hizbul Mujahideen  commander) appears to have been swayed by the ideology of Al Qaeda or something more than the eye can see,” said DGP Shesh Paul Vaid.

Ruling out the presence of ISIS in J&K, he, however, said in view of its claim, the issue needs thorough investigation. “Nothing can be said with certainty right now.”

Al Amaq, the first point of publication for claims of responsibility by ISIS, had a day after the Srinagar attack published the photograph of the stolen weapon and said, “Assassinated an element of police in firing near Srinagar in J&K yesterday”. It added, “A war has just begun”.

On that day, another cop Kultar Singh was killed by gunmen in a similar fashion in  Charar-e-Sharief.  His service weapon too was stolen by the attackers. He was part of the police force guarding a Sufi shrine in the town. Some police officers were of the view that since Al Amaq has talked about “firing near city of Srinagar” it may as well be referring to the attack carried out in Charar-e-Sharief, which is 29 km from Srinagar.

Asked how serious the issue was, Mr Vaid said, “The ISIS made a similar claim in November 2017 when Mughees Ahmed Mir, a terrorist from Srinagar, was killed and a SI Imran Tak was martyred in Gulam Bagh area. That day a police party was fired upon by three men in a car. The police retaliated and killed Mir. But we don’t see any consequent change on the ground. It needs to be verified.”

Union home minister Rajnath Singh also dismissed reports about the ISIS presence in the state. He said Indian Muslims would never allow such outfits to have a base in the country. He had said, “Any Indian Muslim who believes in Islam wouldn't allow the terrorist group to have a base here."

“The ISIS doesn’t exist in the Valley,” a senior ministry official said on Tuesday. He added, “ISIS has been trying to gain a foothold in the country, particularly J&K. But so far it has succeeded in trying to influence some youth through social media, regularly monitored by the intelligence agencies. By claiming the responsibility for killing policemen in the state, the ISIS wants to send out a message that it is active in the region, which is not the case.”

The Islamic State of Iraq and Syria (ISIS) also known as Islamic State (IS) Daesh, the Arabic language acronym, gained prominence in 2014 when it drove Iraqi government forces out of key cities in its Western Iraq offensive.

It has since been designated a terrorist organisation by the UN and by many member countries individually.

The flags of the IS and Al Qaeda had first appeared in J&K during protests and stone-pelting incidents in Srinagar, outside the city’s historic Grand Mosque in 2014. Masked youth held these flags before the glare of cameras and were quickly surrounded by locals, mainly youth, apparently to ensure no harm came to them. During one such display, security personnel chased them away, but made no serious attempt to capture the masked youths. The then chief minister Omar Abdullah had shrugged these incidents off, saying it was being done by some “stupid” youth and that ISIS is  not present in the state.