The NDPP-BJP gained the support of one independent and one JD(U) MLAs which took the total number of seats to 32. 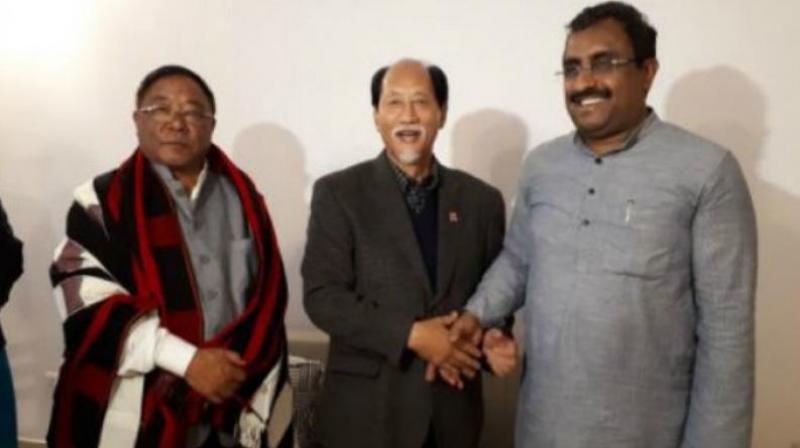 In the 60-member assembly, the NDPP-BJP alliance bagged a total of 30 seats.

The NDPP-BJP gained the support of one independent and one JD(U) MLAs which took the total number of seats to 32.

The Naga Peoples Front (NPF), which was a BJP ally but parted ways before the assembly elections, bagged 27 seats.

NPF leader and outgoing Chief Minister T R Zeliang, however, has expressed interest in joining hands with the BJP to form the government.

The NDPP on Sunday exuded confidence that they would be able to form a stable government in the state as the numbers were on their side. BJP general secretary Ram Madhav said the pre-poll allies have got the party a "near simple majority" in the 60-member assembly.

Highlighting the alliances' priorities when it forms the government, former CM Neiphiu Rio said they have two top priorities -- resolution of the Naga political issue as soon as possible and all-round development of Nagaland.

Tripura is a done deal for the BJP after it put up a spectacular show in on Saturday in the state, ending 25 years of the Left rule.

BJP leader Biplab Deb Kumar is all set to be the next chief minister of Tripura.

The BJP is also looking to form coalition government in Meghalaya in the face of a hung assembly.