In UP, the districts where polling is going on are Mau, Gorakhpur, Maharajganj, Kushinagar, Deoria, Azamgarh and Ballia. 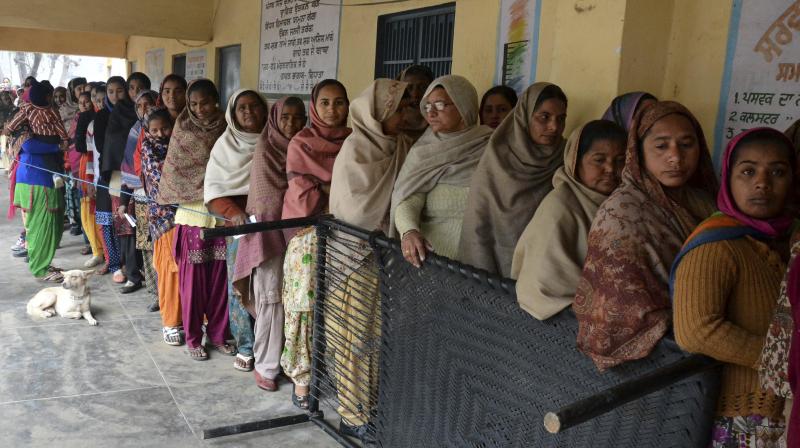 Voters standing in a queue at a polling booth to cast their vote. (Photo: PTI)

Lucknow/Imphal: About 57.03 per cent polling was witnessed till 5 PM in the sixth phase of Uttar Pradesh elections in 49 Assembly seats that started amidst tight security arrangements this morning.

"The polling was about 13 per cent till 10 AM. It's going on peacefully," office of UP Chief Electoral Officer said here.

The Assembly segments of Gorakhpur Lok Sabha constituency, represented by firebrand BJP leader Yogi Adityanath, and Mau, where jailed gangster-turned-MLA Mukhtar Ansari is in fray, also figure in this penultimate phase of polling. This phase will also cover some districts bordering Nepal.

Around 1.72 crore voters, including 94.60 lakh men and 77.84 lakh women, are eligible to cast their votes in this round to decide the fate of 635 candidates, including 63 women.

The districts where polling is going on in the sixth phase are Mau, Gorakhpur, Maharajganj, Kushinagar, Deoria, Azamgarh and Ballia.

Azamgarh Lok Sabha constituency has 10 Assembly seats of which the SP had won nine in 2012 but this time party patriarch Mulayam Singh Yadav has not addressed a single meeting in his parliamentary constituency.

The prestige of Adityanath and Union minister Kalraj Mishra, who represents Deoria in the Lok Sabha, is also at stake.

The BJP is contesting 45 seats and its ally, the Apna Dal, one. Another BJP partner, the Suheldev Bharatiya Samaj Party, is contesting three seats. While the BSP has fielded candidates on all the 49 seats, the SP is contesting 40 seats and the Congress nine under an alliance.

Mukhtar is contesting from Mau and his son Abbas is in fray from adjoining Ghosi seat in Mau district. In the 2012 Assembly polls, of the 49 seats, 27 were won by the SP, 9 by the BSP, 7 by the BJP, 4 by the Congress and 2 by others.

The highest number of 23 candidates are contesting from Gorakhpur and the least candidates, numbering seven are pitted for Mohammadabad Gohna seat in Mau district.

Central Para Military Forces have already reached the constituencies and carried out flag march in sensitive areas. Indo-Nepal border with Maharajganj and Gorakhpur, and border with Bihar have been sealed.

Brisk polling with a voter turnout of 84 per cent was recorded till 3 pm in the first phase of Manipur Assembly election on Saturday, as per details from 72% of polling stations, as declared by the Election Commission.

Manipur Chief Electoral Officer Vivek Kumar Dewangan said 69 per cent of the voters exercised their franchise in the first five hours of voting.

State Nodal Officer (Elections) W Chandrakumar Singh said, "given the circumstances in the state and the nature of voting, turnout is likely to increase after 2 pm."

No report of violence has been reported from anywhere in the state.

The rise in voter turnout reflected a sense of responsibility among the voters, Singh said.

Elections are being held on Saturday in 38 Assembly constituencies in the first phase.

In all, 168 candidates are in the fray in this phase.

Polling will end at 3 pm.