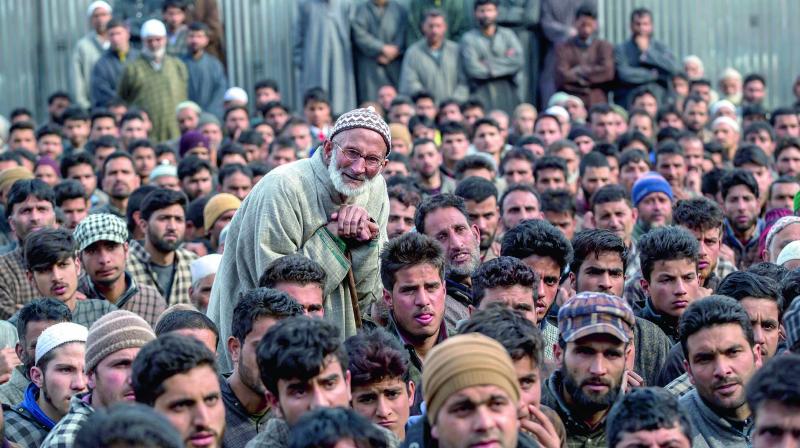 People attend the funeral of Mohammad Ayoub Wani, who was killed in a grenade blast, in Goosu, south of Srinagar. (Photo: AP)

New Delhi: Concerned over increasing incidents of residents disrupting counter-insurgency operations in Kashmir valley, the state government along with the Union home ministry is considering a proposal to impose prohibitory laws around the site of military or police operation.

They plan to use Section 144 of the CrPC, or its equivalent provisions under the Ranbir Penal Code or the Jammu and Kashmir Code of Criminal Porcedure.

The Code of Criminal Procedure (CrPC) bans gathering of more than four people. Since CrPC and the Indian Penal Code do not apply in Kashmir Valley, security forces want their equivalent under the RPC or the J&K CrPC to be used in such situations.

Sources said both the J&K government (BJP-PDP coalition) and the Centre are examining the issue thoroughly in order to ensure that the move does not evoke reaction from locals in the Valley.

The two main security forces, Army and the CRPF, operating in the Valley have informed the Centre that residents, who are often under pressure from terror groups, come out in large number whenever an operation is on.

The security forces also want to ensure that civilians do not get injured. In the last few weeks, there have been instances, particularly in south Kashmir, when militants who were cornered by security agencies managed to escape by taking cover of protesting mobs.

“A huge crowd gathered around the encounter site, pelting stones at the security forces and taking advantage of the chaos two of the militants managed to escape,” a senior security official posted in Srinagar said.

“Had the crowd not diverted the attention of security forces, these militant would surly have been killed,” the official said.

What is more disturbing is that protesters keep women and children in the front, making it difficult for the forces to disperse the crowd, the official said.

This is a deliberate ploy by overground workers (insurgents’ supporters) to ensure that the militants get a safe escape route. Recently, Army chief Bipin Rawat said those helping terrorists in the Valley would also be treated as “anti-nationals”.