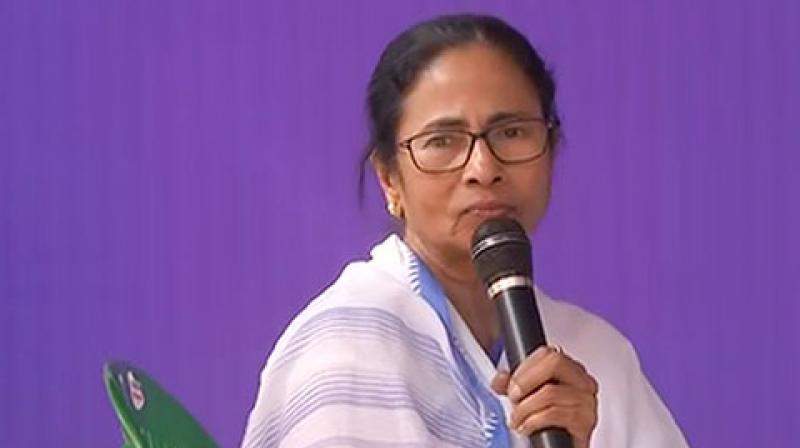 Mamata termed the interim budget as a 'farce' and claimed that the schemes announced by the Centre will not be fulfilled as the Central government lacks the requisite funds. (Photo: ANI)

Kolkata: Continuing with her 'Save the Constitution' dharna here against the BJP-led central government, West Bengal Chief Minister Mamata Banerjee on Monday said her government will not accept any money from the Centre as part of any scheme.

Addressing the public at her overnight dharna site at Kolkata's Metro Channel station, the Trinamool Congress chief said, "We have taken a decision we won't take any money from the Centre regarding any of the Yojanas."

"Modi government has taken away the rights of farmers. Over 12,000 farmers have committed suicide. Farmers' lands have been snatched away. Back in 2006, I had sat on a dharna for 27 days to return their lands. Many farmer families are left with nothing. We are the only government which doesn't allow farmers' rights to be snatched away," Mamata said.

"We have started schemes like Krishi Bondhu, as part of which, farmers get Rs 5,000 per year. We have already given out 30,000 cheques. Under the Bengal Fasal Bima Yojana, 80 per cent of the premium is given by the state government. We have Krishi Pension, under which farmers get Rs 1,000 per month. We are buying rice grains directly from farmers to give them the due benefits. We are also paying them in cheques to ensure no one dupes them," the TMC chief added.

Mamata termed the interim budget as a "farce" and claimed that the schemes announced by the Centre will not be fulfilled as the Central government lacks the requisite funds.

Accusing Modi of plotting a "coup" against her government, Mamata started her protest following a showdown between the CBI and Kolkata Police.

Describing her sit-in over the CBI's attempt to question Kolkata Police chief as a "non-political" protest, West Bengal Chief Minister Mamata Banerjee Monday said support has poured in for her from different quarters of the country. Banerjee also asked his party members to ensure that the protest was peaceful.

Five CBI officials had moved to arrest the city's Police Commissioner Rajeev Kumar, although they were denied entry to the latter's residence and later detained.

CBI interim director M Nageshwar Rao had said that Kumar had tampered with evidence in the Sarada chit fund scam and there was proof to corroborate the same.

Welcoming support for her dharna, Banerjee said, "It's not a political programme. But all political parties can join us in our protest." Banerjee said. In a tweet, the CM had earlier asserted that the Kolkata Police Commissioner "was among the best in the world and that his integrity, bravery and honesty are unquestioned".

Congress president Rahul Gandhi also extended his support to the TMC supremo, stating that the events in Bengal are happening because of the "unrelenting" attack on India’s institutions by Modi and the BJP.

Banerjee’s dharna site is the same venue where she held a 26-day hunger strike in 2006 demanding return of farmland to peasants at Singur, where the Tata Motors' Nano car plant was to come up. The Singur movement catapulted her to power in 2011 defeating the Left Front government.