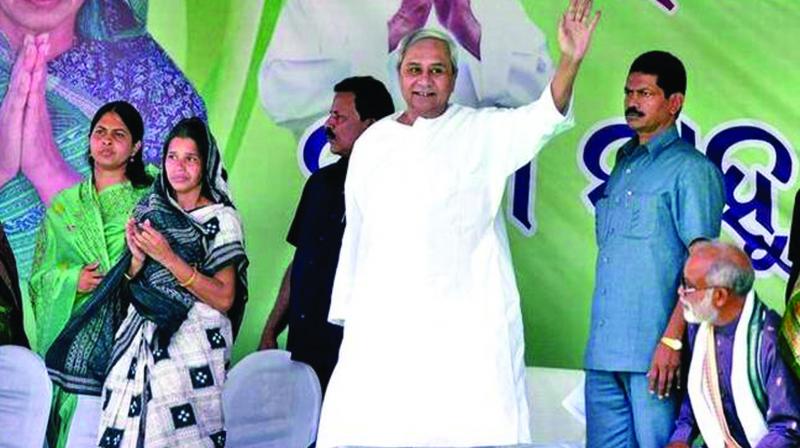 A file photo of Odisha chief minister and BJD president Naveen Patnaik at a farmer’s rally.

Bhubaneswar: With the election process gathering pace in Odisha, all the major parties in the state have started wooing farmers.

The ruling BJD, apparently threatened by the Congress revival in Assembly poll outcomes of Rajasthan, Madhya Pradesh and Chhattisgarh, has launched a special scheme to extend financial support to peasants. Called Krushak Assistance for Livelihood and Income Augmentation (KALIA), the scheme aims to benefit 57 lakh farmers through a direct benefit transfer (DBT) scheme with an outlay of `12,500 crore.

The Congress, on the other hand, has announced to go for farm loan waiver and promised `2,600 per quintal minimum support price (MSP) for paddy if it comes to power.

“If our government comes to power in Odisha in 2019 Assembly elections, we will go for farm loan waivers in just 10 days’ time. We will also pay an MSP of `2,600 per quintal of paddy. What we promise, we fulfill them. In Madhya Pradesh, Chhattisgarh and Rajasthan, we have proved this by announcing farm loan waiver as soon as we came to power,” Congress president Rahul Gandhi announced in a public meeting in Bhubaneswar on January 25.

The BJP is focusing on the state government’s inability to provide the MSP announced by the Modi government to the farmers and lack of irrigation in the state.

“The NDA government had raised the MSP of fair average quality (FAQ) paddy to `1,750 per quintal. However, this ruling BJD has failed to ensure that to the farmers. Farmers in the state are forced to sell their produce below `1,100,” said state BJP vice-president Samir Mohanty.

Knowing well a loan waiver to farmers would cost nearly `20,000 crore to the state exchequer, the BJD went for KALIA scheme. This scheme —with a total allocation of `10,180 crore — aims at reaching out to all the farmer families which the ruling party feels would side with it in the Assembly polls.

Over 70 per cent families in Odisha are directly or indirectly engaged in farm sector.

In order to bring the farmers into a universal healthcare coverage, the BJD government has rolled out Biju Swasthya Kalyan Yojana (BSKY). This scheme has included all the farmers and their family members who are already availing free healthcare up to `1 lakh in government and private hospitals under Biju Krushak

Kalyan Yojana (BKKY). They will now avail healthcare benefits up to `5 lakh. In case of women members of the farmers’ families, they would get healthcare assistance up to `7 lakh.

In November 2018, the then agriculture minister Pradeep Maharathy had told the Assembly that 227 families had committed suicide. Though the minister did not attribute any reason for the deaths of the farmers, it was then widely reported that the deceased were under stress because of rising debt burdens and poor returns for farm produce.

As the major parties get engaged in brickbatting over farmer issues, Naba Nirman Krushak Sangathan, a major organisation of the peasants, has declared it would not accept anything less than a guaranteed income provision.

“We have been demanding price, prestige and pension for the farmers. While the income of government employees has gone up by 300 times since 2000, the farmers in the state have been battling to get MSP of their produces. Secondly, they have no assured income as a result of which some of them are taking the extreme step when faced with crop loss, distress sale and debt burden,” said Akshaya Kumar, convenor of Naba Nirman Krushak Sangathan. As many as 3.18 crore voters will exercise their franchise in the Assembly polls which will be held along with the LS polls.