Maharashtra Cong chief Ashok Chavan said it is important to identify the 'real enemy' and how any rigid stance may 'help the monster grow'. 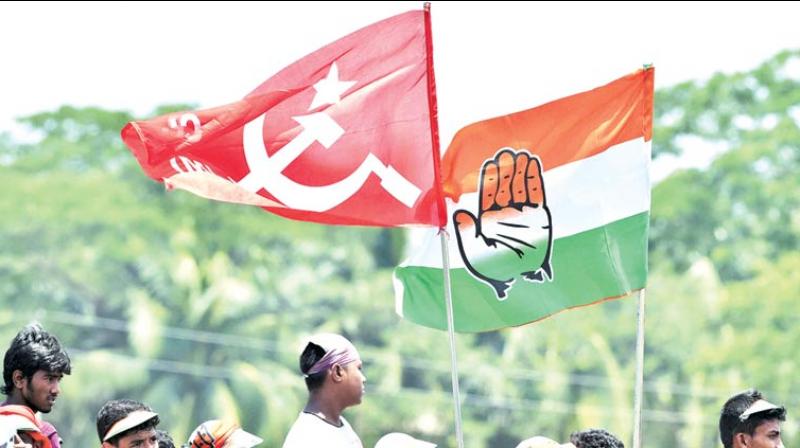 'I can only pray that that he (Karat) does a rethink before his party's general session in April, where his resolution will be ratified or rejected, in the larger interest of the country,' Chavan said. (Photo: PTI)

Mumbai: Maharashtra Congress chief Ashok Chavan has appealed to CPI(M) leader Prakash Karat to reconsider his resolution of "no alliance" with the party in the larger interest of the country ahead of the Left party's general session in April.

Appealing to Karat, the CPI(M) politburo member, to do a rethink on his resolution of "no alliance and no cooperation" with the Congress, Chavan said "any prick lines with the Congress can always be sorted out".

In a move aimed at consolidating anti-BJP parties ahead of 2019 polls, Chavan also asked Bharip Bahujan Mahasangh president and Dalit leader Prakash Ambedkar to drop his anti-Congress pitch while dubbing him as an "erudite leader of the Dalits after B R Ambedkar".

In a politically significant development, CPI(M) general secretary Sitaram Yechury's draft resolution proposing an alliance with the Congress was defeated in voting during the party's central committee meeting last month.

In a blog on Saturday, Chavan said it was "flummoxing" that when comrade Yechury and comrade Raja walked shoulder to shoulder with other opposition leaders in the "save the Constitution" march, the Congress became "untouchable" for comrade Karat at this critical juncture.

Chavan was referring to the march which was held in south Mumbai on January 26 and was attended by Left leaders, JD(U) rebel Sharad Yadav, NC's Omar Abdullah, NCP chief Sharad Pawar and others.

"I can only pray that that he (Karat) does a rethink before his party's general session in April, where his resolution will be ratified or rejected, in the larger interest of the country. Any prick lines with the Congress can always be sorted out," the former chief minister said.

He also took an apparent jibe at Ramdas Athawale, the Union minister of state for social justice in the NDA government.

"Prakash Ambedkar is emerging as an erudite leader of the Dalits after Babasaheb Ambedkar. He is astute, educated, sophisticated and presentable. It is these qualities that make him stand apart from those who claim to be champions of the Dalit cause but have fallen for allurement and largesse of BJP," Chavan said.

Athawale's RPI (A) has the largest following among the Dalits in Maharashtra who are divided in various factions.

"I have personally witnessed how they lost their trustworthiness and are being hated by the Dalit community. This is the time when Prakashji needs as many friends as possible across the political spectrum to consolidate his position," Chavan said.

He also showered praises on Prakash Ambedkar, the grandson of B R Ambedkar, but expressed dissatisfaction over his decision of staying away from the march.

He said the march was not the occasion to display the "discomfort" Prakash Ambedkar had with certain leaders.

"It (the march) was an expression of disenchantment with current rulers and solidarity with the Constitution. Why shy away from shaking hands with the Congress to begin with," he said.

"I'm sure Prakash Karat and Prakash Ambedkar are both bright enough to distinguish who the real enemy is and how any rigid stance may eventually help the monster grow," the Nanded MP said.

"Today, we are witnessing what can be described as butchering of innocent people on the false notions of nationalism," he alleged.

In a bid to reach larger constituency, Chavan said the "religious supremacy" was thrust upon the country.

He alleged that the unchecked arrogance of the current dispensation had reached its peak and religious supremacy was being thrust upon the country.

Minorities and Dalits were being treated as secondary citizens and even ministers were saying that they had assumed power to alter India's secular constitution, Chavan said.

The Congress is trying to bring together opposition parties on a wider anti-BJP platform in a bid to pose a formidable challenge to the saffron party in the 2019 elections.