16-year-old Tusshar died in his school's toilet after a fight with fellow students in northeast Delhi's Karawal Nagar. 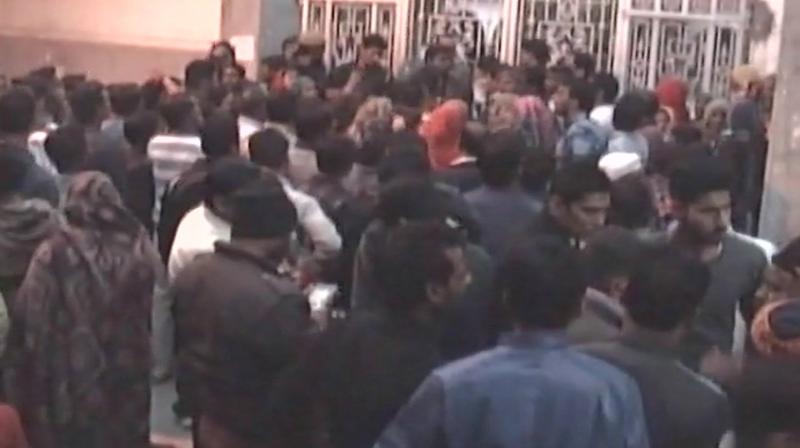 Local residents along with the boy's family members staged a protest at the Karawal Nagar Chowk and demanded a probe into the matter.(Photo: ANI | Twitter)

New Delhi: An absconding minor accused in the murder of a class 9 student in the toilet of a school in northeast Delhi was on Saturday apprehended, the police said. This takes the total to four students who have been apprehended in the case.

16-year-old Tusshar died in his school's toilet after a fight with fellow students in northeast Delhi's Karawal Nagar.

After scanning CCTV footage, police apprehended three students of the school and transferred the case registered under Section 304 to 302 (murder).

They found that the boy had got involved in a fight with four students.

The boy fell down after receiving punches during the fight and died later, Ajit K Singla, DCP (northeast) said.

Tusshar was found unconscious by some students in the bathroom and was taken to a hospital. He was later referred to the GTB Hospital where he was declared brought dead, they said.

Though the school administration claimed that he was suffering loose motions, the boy's family alleged that he had a fight with some students and was thrashed, police said.

However, the police said that no injury marks were found on the boy's body.

On the basis of a complaint by the boy's family, a case was registered. The medical board will conduct the post-mortem on Friday, they said.

Police are questioning his classmates and the students who had found him in an unconscious state in the bathroom.

Tusshar is a resident of Karawal Nagar.

The family also alleged that school authorities were trying to shield the students he had a fight with.

They alleged that he was beaten up by some students and left to die in the washroom, according to a report in NDTV.

Local residents along with the boy's family members staged a protest at the Karawal Nagar Chowk and demanded a probe into the matter.

This resembles the Pradyuman murder case, where a class 2 student of Gurgaon's Ryan International School was found dead with his throat slit in the school toilet on September 8, 2017.