'Prohibitory order has been imposed till 6 pm today after considering tense situation prevailing in the town,' District Collector said. 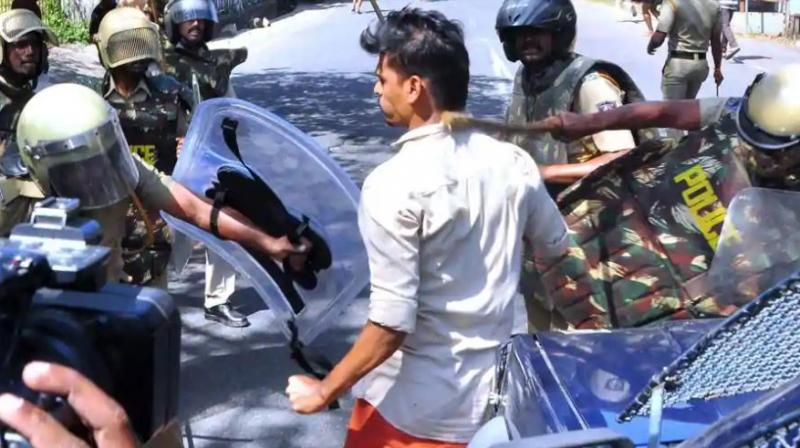 Police beat a protester during a demonstration over two women entering the Sabarimala Ayyapa temple, in Palakkad in Kerala. (Photo: AFP)

Thiruvananthapuram: Prohibitory orders have been imposed in Palakkad town and Manjeswaram Taluk of Kasargod district in northern Kerala late Thursday night after widespread protest erupted over the entry of two women in their menstrual age in to Sabarimala temple.

"Prohibitory order has been imposed till 6 pm today after considering the tense situation prevailing in the town. We have called for an all-party meeting at 4 pm. Further decisions will be taken after that meeting," Balamurali told PTI.

Kasargod district Collector D Sajith Babu issued the prohibitory order at Manjeshwaram Taluk under Section 144 of the Code of Criminal Procedure (CrPC). Prohibitory orders have been issued at 11 pm Thursday for 24 hours. Section 144 of CrPC prohibits an assembly of more than four persons in an area.

Palakkad town witnessed widespread violence since Wednesday morning where the party offices of CPI(M), CPI and the BJP were attacked. In the dawn-to-dusk hartal on Thursday called by the Sabarimala Karma Samiti, and supported by the BJP, the party offices of CPI and CPI(M) were vandalised. Later in the evening, a march of Left Democratic Front turned violent with protesters attacking the BJP office.

Scores of vehicles were damaged in Palakkad town and shops were vandalised.

A day after two women- 42-year-old Bindu, a college lecturer and CPI(ML) activist from Kozhikode district's Koyilandy, and Kanakadurga, 44, a civil supplies department employee from Angadipuram in Malappuram, entered the Sabarimala shrine, Kerala witnessed violence and unrest across the state.

A dawn-to-dusk hartal or shutdown which began at 6 am on Thursday was mired with incidents of vandalism, clashes and stone pelting. The hartal was called by the Sabarimala Karma Samithi, an umbrella organisation consisting of pro-Hindutva outfits and was supported by mainstream political parties such as the Bharatiya Janata Party (BJP).