India   All India  04 Jan 2019  Miners should have been saved by now, says Supreme Court
India, All India

Miners should have been saved by now, says Supreme Court

The court also asked the Meghalaya government as to why it was not successful in rescuing these people. 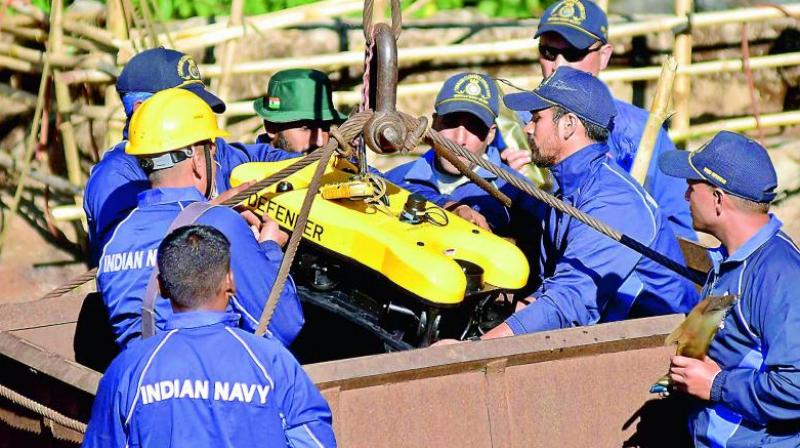 Navy personnel conduct rescue task at the site of the coal mine collapse at Ksan, in Jaintia Hills district of Meghalaya, Monday. (Photo: AP)

Guwahati: The Supreme Court on Thursday rapped the Meghalaya government over its inability to rescue 15 people who have been trapped for over three weeks in a rat-hole mine in the Jaintia Hills since December 13.

The Supreme Court bench comprising Justices AK. Sikri and S. Abdul Nazeer said, “We pray that all people trapped in mines are alive. They should have been rescued by now. We are not satisfied with the action taken by the state government.”

The court also asked the Meghalaya government as to why it was not successful in rescuing these people. “It is a question of life and death for the trapped miners. For people trapped in the mine in Meghalaya, every minute counts,” the top court added.

The court also directed solicitor general Tushar Mehta to file its response by Friday on step it intends to take to rescue the trapped miners. “Effective steps need to be taken on an urgent basis to save the lives of miners,” the court said while hearing a PIL filed by advocate Aditya N. Prasad.

The counsel, appearing for the state, told the court that they have taken adequate steps in the rescue operation and the Centre was also lending support to them.

The state government in its reply to the apex court said that 72 NDRF personnel, 14 Navy personnel and Coal India personnel have been working since December 14 to rescue the trapped miners.

The PIL filed by advocate Aditya N. Prasad had sought a direction to the Centre and other authorities concerned to prepare a standard operating procedure (SOP) for rescue operations in “mines and other similar conditions”.

The plea, filed through advocate Astha Sharma, sought directions to the Centre and the state to utilise the services of the technical wing of the Indian Armed Forces — the Indian Army, Indian Navy and Indian Air Force — in the operation immediately to rescue the 15 miners.

The rat-hole mine, atop a hillock fully covered with trees in East Jaintia Hills district, was flooded when water from the nearby Lytein river gushed into it, trapping the miners.

Meanwhile, Odisha Fire Service and the National Disaster Response Force (NDRF) resumed rescue operations at the rat-hole mine in East Jaintia Hills on Thursday by installing second high-power pump in the adjoining mine which is  500 meter from the main shaft where 15 miners are trapped.

The coal pits are narrow and deep but rescue team succeeded in installing a second pump in the shaft to expedite the process of dewatering the mines.

The authorities said that pits are dark and despite the use of halogen lights, visibility remained a problem for divers.

The divers from the Indian Navy and the NDRF did not go down the main shaft because dewatering was going on in the nearby mines. We are expecting a decrease in water level soon to start the search operations,” said the spokesperson for the operation.