Touted as the biggest cultural and religious event in the world, the Kumbh Mela at Prayagraj (formerly Allahabad). 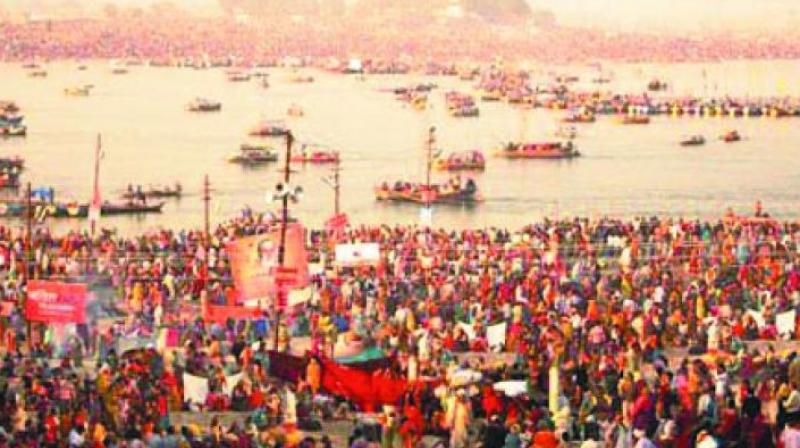 1,400 CCTV cameras will not only keep an eye on safety and security of pilgrims but also monitor the cleanliness arrangements. (Photo: Representational Image)

Mumbai: About 12 crore devotees are expected to visit Kumbh Mela starting at Prayagraj in Uttar Pradesh from January 15 and the government has made elaborate arrangements to ensure their security and smooth conduct of the mega event, said a minister from the northern state Thursday.

Touted as the biggest cultural and religious event in the world, the Kumbh Mela at Prayagraj (formerly Allahabad) has been accorded the status of world heritage by the UNESCO.

The event, which will conclude on March 4, has been included in the list of 'intangible cultural heritage of humanity.'

"The Kumbh Mela area has been brought under surveillance of these centres and CCTV cameras. The system will facilitate controlling and keeping safe the traffic movement and the crowd coming to the mela," he said.

He said 1,400 CCTV cameras will not only keep an eye on safety and security of pilgrims but also monitor the cleanliness arrangements.

The minister said representatives of 192 countries are expected to visit the Kumbh Mela.

"Ambassadors of about 71 countries had witnessed the preparations for this grand event. A conference on NRI day is being organised in Varanasi this month. Over 5,000 NRIs are likely to visit the Kumbh," he added.

A temporary township has been set up to accommodate the devotees.

"To ensure participation of people from all states, the Uttar Pradesh government is making efforts to bring people from every state in the kumbh. For the convenience of devotees and tourists, air, road and river transport facilities have been made available," Khanna said.

Meanwhile, the Narayan Seva Sansthan (NSS), a charity that runs a smart village for the differently abled people and a hospital in Udaipur, plans to set up a spiritual-cum- surgical camp at the Kumbh Mela.

"The Narayan Seva Sansthan will also establish a 100- bed hospital along with artificial limb development unit where differently abled individuals will be measured for customised size and shape.

"Later, these customised limbs will be installed and donated to the differently abled beneficiaries," Prashant Agarwal, president, NSS, said.