'Not about Priyanka or Gandhi family': Robert Vadra on expresses safety concern

Sources added that an inquiry was being conducted by the CRPF regarding the same. 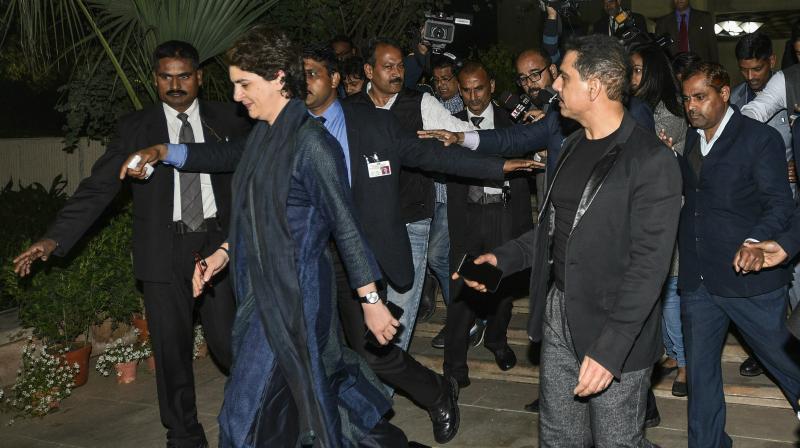 According to sources in the party, last week unknown people had entered the premises of the Congress leader in an SUV without any prior appointment and then sought selfies with Gandhi. (Photo: File)

New Delhi: A day after alleged security breach at Delhi-based residence of Congress general secretary Priyanka Gandhi Vadra was reported, her husband and businessman Robert Vadra on Tuesday attacked the central government saying that security throughout the country was compromised.

"It's not about the security for Priyanka, my daughter and son or me or the Gandhi family... It's about keeping our citizens especially the women of our country, safe and feeling secure. Security throughout the country is compromised... Girls are being molested/raped, What society are we creating," Vadra wrote on Facebook.

Attacking the government over alleged lack of providing security to the citizen of the country, he said, "Security of every citizen is the government's responsibility. If we are not safe in our own country, our homes, not safe on roads, not safe in the day or not at night, where and when are we safe?"

According to sources in the party, last week unknown people had entered the premises of the Congress leader in an SUV without any prior appointment and then sought selfies with Gandhi.

Meanwhile, Congress has filed a complaint with the Central Reserve Police Forces (CRPF) regarding an alleged security breach.

Sources added that an inquiry was being conducted by the CRPF regarding the same.

The decision was taken by the Ministry of Home Affairs (MHA) after reviewing the security cover of the three Congress leaders. The Central government has decided to provide them Z-plus security, with CRPF personnel now guarding the members of Gandhi family.