Sister Lucy was expelled by the Franciscan Clarist Congregation (FCC) in August this year for 'grave violations'. 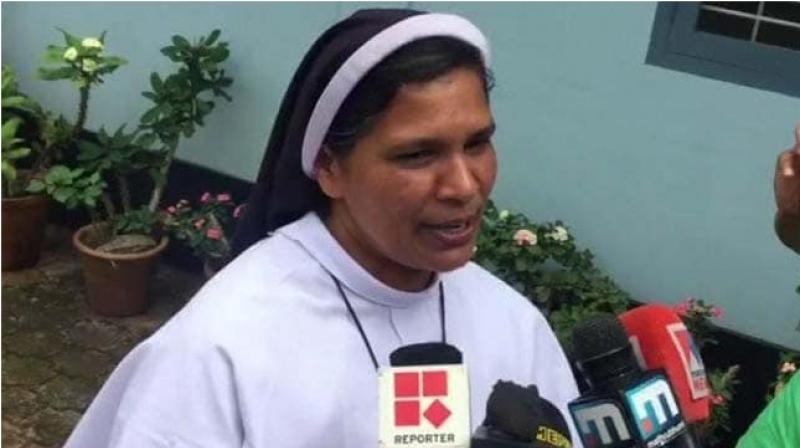 A nun involved in protests against rape-accused Bishop Franco Mulakkal has written an autobiography highlighting stories of sexual abuse by priests and bishops, a fact which she says "everybody knows but is silent about". (Photo: Twitter/ ANI)

Wayanad: A nun involved in protests against rape-accused Bishop Franco Mulakkal has written an autobiography highlighting stories of sexual abuse by priests and bishops, a fact which she says "everybody knows but is silent about". Sister Lucy Kalappura says her book titled ''Karthaavinte Naamathil'' (in the name of the Lord) is an account that draws from what she saw and experienced.

"It is about life experiences and sexual abuse and harassment of nuns by priests and bishops -- a fact which everybody knows but is silent about," she told news agency ANI.

"I had started writing it in 2004-05 because during the period of 2000-03 I had a bitter experience - mental torture from the congregation. I thought it will be better to keep a record of all that. So I started to write little by little," Sister Lucy said.

Narrating the incidents of "sexual abuses and torture faced by the sisters", she said that even church leaders who supported the sisters, the victims of sexual abuse, have now started supporting the accused.

"It is against the teachings of Jesus Christ. It pained me and I thought this should be published, whatever is happening," the Sister said.

Sister Lucy was expelled by the Franciscan Clarist Congregation (FCC) in August this year for "grave violations"; she was accused of buying a car on loan, having a driving license, publishing a book and spending money without her superiors' permission.

She said many of the charges were a "deliberate attempt to paint her in bad light."

In January, she was served the first warning letter "for violating the vow of obedience" from the Superior General of the Congregation, followed by two more in February and March.

Bishop Mulakkal, a senior member of the Roman Catholic clergy in India, was arrested last year following allegations by a nun that he repeatedly raped and sexually assaulted her at a convent between 2014 and 2016, a charge that he denies.