In India, a person becomes 'mad' after he becomes an MLA: Satya Pal Malik

He also said that the political successors of Gandhi have 'forgotten' the qualities of Gandhi. 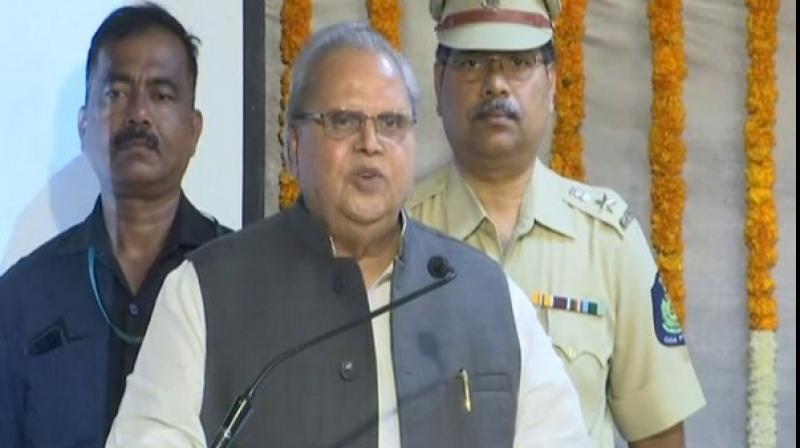 The former Jammu and Kashmir Governor was sworn in as the Governor of Goa on November 3. (Photo: ANI)

Panaji: Goa Governor Satya Pal Malik on Monday credited Mahatma Gandhi for introducing morality in politics while asserting that in today's times a person becomes 'mad' after he is made a lawmaker in the country.

Citing cases of greed and power in politics, he said, in our country, a person becomes 'mad' if he is elected as a Member of Legislative Assembly (MLA).

"I want to say one thing that Gandhi had no pride. He was a man of simplicity. Today, in India, a person becomes mad after he becomes an MLA. One must learn from Gandhi," he added while speaking at an event "Gandhi Katha", which was organised by the Directorate of Art and Culture Goa in association with Raj Bhavan to mark the 150th Birth anniversary of Mahatma Gandhi.

He also said that the political successors of Gandhi have 'forgotten' the qualities of Gandhi.

Quoting his mentor - the late socialist leader Ram Manohar Lohia, Malik said: "We have known Gandhi ji from the vision of Lohia. Lohia believed that Gandhi was physically killed by Godse. But the real political successors of Gandhi, they killed the soul of Gandhi. They forgot the qualities of Gandhi and reduced him to the status of a charkha."

"Lohia believed that Gandhi's biggest gift to the world was Satyagraha to fight against injustice," he added.

The former Jammu and Kashmir Governor was sworn in as the Governor of Goa on November 3.

President Ram Nath Kovind had on October 25 appointed Satya Pal Malik as the Governor of Goa.