A grieving penitent Sugreev who blames “an enemy’s arrow”’ is in this theatre version, not aware that the fatal wound has come from Ram’s arrow. 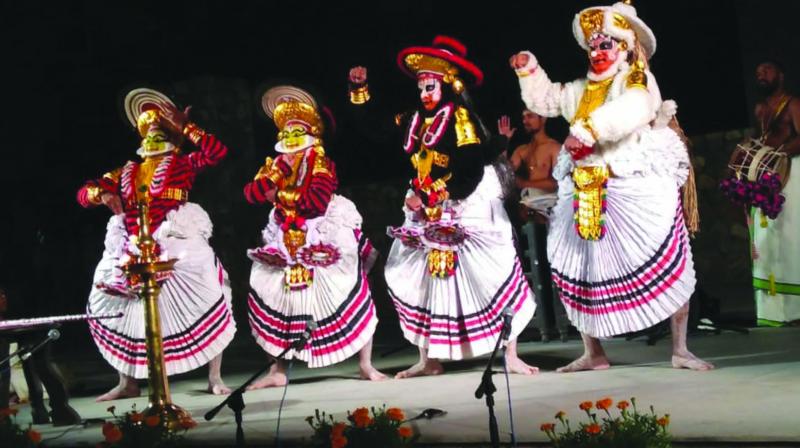 The open air performance space at Sundar Nursery, with an extremely murky Delhi sky, had the half-dozen-odd people who had arrived early wondering if Aga Khan Trust for Culture and Unesco, jointly planning this evening, had made a wise choice of venue and if people would venture out on such an evening.

Kutiyattam — Kerala’s unbroken legacy of a living tradition of Sanskrit theatre from the 10th century onwards, with its spectacular theatrical language, despite its convention-ridden, slowly evolving mode of enactment, so completely antithetical to today’s fast moving world, has miraculously survived. Unesco’s declaration of Kutiyattam as an “Oral and Intangible heritage of Humanity” gave the art form a shot in the arm. Traditionally, the exclusive preserve of the Chakyar community and performed only in the temple Kootambalam, Kutiyattam in the 1950s first came out of the temple environs to be presented in secular spaces, and in time its doors have been opened to students from outside the traditional inheritors. Though youngsters from other communities have started performing, Kutiyattam’s highly culture-specific identity, with the long years of rigorous and meditative concentration, calls for practitioners, making it a difficult art form not attracting too any serious aspirants — and hardly any from outside Kerala.

The open air performance space at Sundar Nursery, with an extremely murky Delhi sky, had the half-dozen-odd people who had arrived early wondering if Aga Khan Trust for Culture and Unesco, jointly planning this evening, had made a wise choice of venue and if people would venture out on such an evening. But one need not have bothered, for those (admittedly small numbers) who have been treated to the grandeur of Kutiyattam would not miss seeing the Nepathya Moozhikulam group led by Margi Madhu performing Bali Vadham.

In how many theatre forms can one experience an actor having the courage to enact dying, almost breath by breath, on stage — prolonged over half-an-hour or more — as in Bali Vadham of Kutiyattam? The execution calls for breath control of a phenomenal nature and Margi Madhu Chakyar, as Bali, certainly had the audience glued to their places while portraying the final moments of Bali — through stages of broken breathing (chinnan), difficult breathing (mahan) and the last breath (oordhvan) — a process said to have been developed by the great Madhava Chakyar, who underwent scientific training in this crucial discipline of controlling one’s breathing at Kodungaloor.

To have edited what is the First Act of Bhasha’s Abhisheka Natakam (which in the old days would be enacted over days) into a two-hour slot to fit the needs of today’s performance requirements, without making it appear needlessly abridged, was indeed an accomplishment in itself — and very skilfully done by any standards by Margi Madhu. The first scene had Nepathya Rahul Chakyar as Sreeram showing his prowess with the bow and arrow to convince Sugreev (enacted by Nepathya Yadukrishnan) of his ability as a warrior. Only after seeing how one lethal arrow of Ram could pierce seven tree tops so accurately, did Sugreev realise what a powerful ally he had found in Ram. In his vainglorious fashion, he imagines himself sitting even on Indra’s throne, with Ram by his side of course, vanquishing all other powers. It is most heartening to watch how young Nepathya Srihari Chakyar (son of Madhu and Dr Indu) is fast evolving. In the role of Lakshman looking for the Kishkinda region in the forest and recognising it at once by its thick vegetation of tall trees, this actor’s ability, even in a small appearance, to make his presence felt, shows a fine artiste in the making.

Forgetting his past inability to defeat the brother, a better and more ruthless warrior, Sugreev now buoyed by Ram by his side, sends out a clarion call to Bali, challenging him to war.

The second scene with Bali and Tara was very moving. Madhu Chakyar as Bali, with supreme confidence in his own powers to crush Sugreev, is seen pacifying a concerned Tara — that no matter whose help Sugreev seeks, he will be no match for Bali, his brother. “I will defeat him even if he is helped by the Lotus-eyed Lord Vishnu himself,” and here in a throwback (Nirvahanam) Bali enacts in brief but with telling force, the Prahlada/Hiranyakashipu episode and how when challenged, if the omnipresent Vishnu could be found even inside the pillar, Hiranyakashipu’s insolent kick splits the pillar, to reveal Narasimha, half-man and half-lion, who, emerging from its centre, attacks and kills Hiranyakashipu by disemboweling him — acts portrayed with gusto in art forms like Kutiyattam and even Kathakali (which gets it from older styles like Kutiyattam). “Not even if he is helped by Shiva with his white axe, will I fear”. At this point of mentioning Shiva, even while referring to his own ability to get the better of the God, he utters the Lord’s name with a prayerful salutation — being a great Shiva bhakt himself.

The subtle power of abhinaya was best seen in Dr Indu’s performance as Tara. Holding on to a piece of Bali’s top coat, she sits through most of the act wordlessly, her expression fully conveying the whole truth of her feelings — full of trepidation, for what is about to happen. With no other movement barring the mukhabhinaya, except for the end when she mentions in a tone of warning that Sugreev this time is coming with strong allie — she was so powerfully communicative. Bali’s confident aggression counterpointed by Tara’s mobile expressions of impending tragedy, her hands, continually (in a symbolical action) engaged in playing with the mangalsutra round her neck, make a strong impression.

The actual Bali-Sugreev encounter is largely communicated through the reactions of Ram and Lakshman, with Lakshman informing Ram that Sugreev, like the monkey that he is, has discarded all subtleties and is rushing headlong, screaming, approaching his brother without any plan. While he is describing the bout, a hefty blow from Bali fells Sugreev. Soon a rattled Hanuman agitatedly tells Ram that his helpless master Sugreev is in dire need of his promised help, and Ram’s arrow, shot from an undetected hideout behind a tree, travelling speedily through the air, strikes Bali, who falls mortally wounded.

A grieving penitent Sugreev who blames “an enemy’s arrow”’ is in this theatre version, not aware that the fatal wound has come from Ram’s arrow. Bali, realising his end is near, passes Sugreev the royal insignia he has to wear as the heir to his throne. And lying on his deathbed, Bali asks Ram as to how he could forsake the king’s dharma and attack him in deceit without revealing his presence. Ram has no real answer and Sugreev’s weak statement that one has to suffer for one’s sins, is neither here nor there.

The plays of Kutiyattam, while dealing with themes from the epics, give complete freedom to the actor while interpreting a character, and what one has in the end is a philosophical exchange — where various acts are questioned — with no character having unquestioning license enshrined in divinity.

The impact and mood build up during rendition owe a great deal to the accompaniment seated on a raised stool at the back of the performing actors — the leading accompaniment comes from the Mizhavu drum, played with expertise by Kalamandalam Ratheesh Bhas, Nepathya Jinesh and Nepathya Aswin, with edakka played by Kalanilayam Rajan and thalam by Adithi Gopalakrishnan. Of equal importance was the make up by Kalamandalam Satheesan.