Inspector Subodh Kumar, who was posted at the Syana Police Station, died in the violence, he said, but did not elaborate. 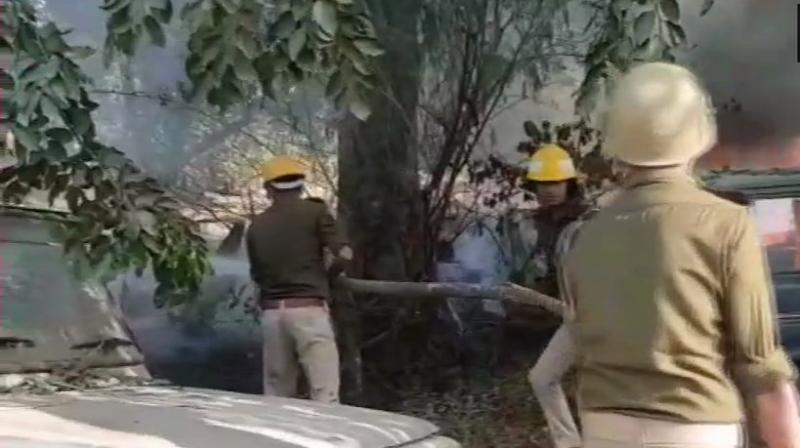 As tension prevailed in the area, policemen from several police stations have been rushed along with senior officials to take control of the situation, police said. (Photo: ANI | Twitter)

Bulandshahr: A police inspector and a youth were killed on Monday as a rampaging mob protesting alleged illegal cow slaughter torched a police post here and clashed with police, which opened fire, officials said.

Additional Director General (Meerut zone) Prashant Kumar said the protestors from Mahaw village and nearby areas pelted stones on the police and indulged in arson, setting ablaze several vehicles and Chingarwathi Police Chowki. Inspector Subodh Kumar, who was posted at the Siana Police Station, died in the violence, he said, but did not elaborate.

Police also said a 20-year-old youth, identified as Sumit, died of gunshot wounds. As tension prevailed in the area following the violence that lasted nearly three hours, the Uttar Pradesh government deployed additional police, including over 1,000 personnel of anti-riot forces, and ordered multiple probes -- by SIT, ADG-Intelligence -- and a magisterial inquiry. Giving details of the incident, ADG Law and Order Anand Kumar said in Lucknow that trouble started after villagers found some body parts of cows in a jungle in Mahaw village.

"This morning carcasses of the cows were found dumped in a forest area outside the village. Activists of right-wing organisations soon gathered at the spot and alleged that people of a community were indulging in cow slaughter," he said. Angry villagers and members of various Hindu groups brought the animal remains in tractor-trolley to the Chingarwathi Police Chowki and demanded action against the culprits. They raised slogans against the police administration and blocked the Bulandshahr-Garh State Highway.

Bulandshahr District Magistrate Anuj Kumar Jha, Sub-divisional Magistrate Avinash Kumar Maurya and other senior officials tried to reason with the protestors but they refused to budge. The protesters soon turned violent, pelting stones on policemen and indulging in arson, he said, adding that police had to open fire in self-defence. Kumar said the UP government acted swiftly and ordered an SIT probe, besides an inquiry by the ADG intelligence and a magisterial probe.

He said that additional reinforcements have been rushed to the spot of violence, and described the situation as under control. "Police inspector Subodh Kumar died in hospital during treatment after being hit by a blunt object, probably stone," he said.

Amid reports that the cop was lynched, the ADG said the exact reason for his death will be known after a post-mortem and the inquiry by the ADG-intelligence who has been asked to submit a report in 48 hours.

The ADG said that security has been bolstered in the area with 500 personnel of Rapid Action Force and 600 personnel of Provincial Armed Constabulary. DM Jha said, "Some people took the bodies of the animals and tried to block the road. The policemen were attacked when they tried to get the road opened." Meanwhile, mobile footage from the area, shot by onlookers, showed young men attacking policemen with stones.

The violence started at around 10 am in Siana area in the district where a major three-day Islamic congregation had concluded this afternoon. The policemen warned against attempts to spread any misleading information, saying the incident was not related in any way to the congregation.

"The incident occurred 40-50 km away from the congregation site. Some miscreants were behind the violence and action is being taken against them in accordance with law," the Bulandshahr Police tweeted in the evening.