Jan Dhan money to go to poor; this is the last queue: Modi

'I want to thank the people of Moradabad for extending their support to the BJP during the 2014 elections,' Modi said. 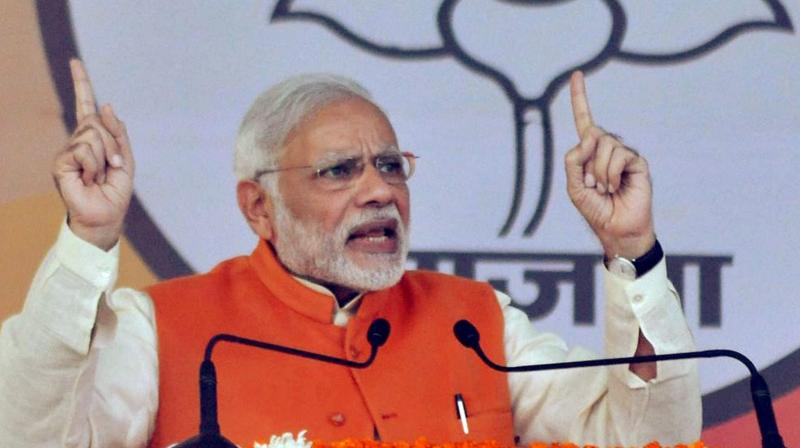 Moradabad: Prime Minister Narendra Modi on Saturday said he is working on a formula on how to send the corrupt to jail who deposited their money in Jan Dhan accounts of poor after demonetization and ensure this money goes to the poor households.

Responding to criticism over long queues outside banks and ATMS since the note ban decision on November 8, he accused his rivals of trying to "spread disinformation and despair" and said "this will be the last queue for the people who have been standing in line for the last 70 years for their daily needs".

"All those who are Jan Dhan account holders, you should not return the money that others have put in your accounts. If you promise to do so, I am working hard on to devise a formula to send all those who deposited their money illegally into your accounts to jail and to ensure the money goes to the poor households," Modi said addressing a public rally here.

Jan Dhan accounts were opened under a special campaign for providing banking facilities to the poor launched by the Modi Government in August, 2014.

He said the corrupt rich are not doing any favour, as they have looted this money from the poor in all these years. "I salute the people of the country for standing for long hours in queues.”

"I want to ask those politicians who are crying over these long queues.”

"You kept the entire nation in queues for 70 years after independence, as one had to stand in lines for even sugar, kerosene and wheat in the past. This is the last queue to end all those queues," he said to applause from the crowds.

The PM said only the honest can queue up outside the banks to deposit the money, while the corrupt are standing outside the houses of poor.

Modi said he was being hounded by his rivals as "culprit" on the note ban issue and pledged that this fight against the corrupt and corruption shall not stop "come what may".

"I am being hounded as if I have committed some crime by waging a battle against graft. But, what can my opponents do to me? I am a fakir (hermit)...jhola ley kar chaley jayenge (I will exit with my little belongings)," he said.

Modi was addressing BJP's Parivartan Yatra to mobilise public support ahead of the upcoming Assembly elections in Uttar Pradesh.

Tearing into the opposition, he said, "Some call me a culprit.... Is it a crime to fight corruption which is at the root cause of all ills prevailing in the country for the past 70 years?"

Without naming any party, Modi made a subtle reference to Congress when he said that the 1.25 crore people were his leaders and he had no high command.

"You are my leader...I have no high command," he said. His attack against the opposition came in the backdrop of their protests inside and outside Parliament on note ban, where the Winter Session has so far been almost washed out with the uproar eclipsing the proceedings every day.

Talking tough, Modi said corruption will not go on its own and has to be wiped out.

Modi said many governments in the past made announcements but this is the first government which gives an account of the work done to the people of the country.

The Prime Minister said government should not be merely for making announcements. It should launch schemes and ensure their effective implementation.

Attacking the opposition, he said parties in power in the past had worked only for themselves and for their near ones, but not for the poor.

"I had announced from Red Fort that power will reach 18,000 villages deprived of it in 1,000 days. There were over 1,000 villages in Uttar Pradesh alone. In half the time, over 950 villages have been taken care of," he claimed.

Asking the poor not to withdraw any money from their Jandhan accounts, he said, "I will fix those who used to chant 'money, money' earlier and are now saying 'Modi, Modi'."

Modi said his decision to ban notes did not go down well with the corrupt as they were facing the pinch.

He said the rich do not have the strength to stand in queues and are thus queuing up outside the homes of the poor for depositing their money into their accounts.

"The dishonest people are unable to go to banks and deposit their ill-gotten wealth. They are the ones complaining against the government's demonetization move," he said.

"Today the dishonest are queuing up outside the houses of the poor after demonetization for their help through the Jan Dhan accounts," he said.

"The corrupt and rich people have asked poor villagers to safeguard their money for them, to stand in lines and deposit it in banks for them. Instead of standing in queues at banks, they are standing in queues outside the houses of the poor," the prime minister said.

"Those who have money to hide are the ones blaming me," he said, asking the gathering, "Should I not fight corruption? Will corruption disappear by itself?"

The common man is fed up with corruption and "if people come to know the intentions are good, they are ready to face any challenge", he said referring to those standing in long queues outside banks and ATMs.

Asking people to go digital, Modi told them to use their mobile phone as their wallet and there was no need to use cash. "People will not forgive the corrupt, the country has to be rid of all ills during the past 70 years," he said.

Modi reminded BJP volunteers and party workers once again of the government's assurance that things will ease up after a period of 50 days. "I had said there will be hardships for now, but things will improve. You might have to stand in queues to withdraw money, but it's essential to eliminate corruption," he said, and cited instances of parents doling out heavy sums for admission of their children in schools and for higher studies. On shortage of currency notes, Modi suggested use of plastic money and to go cashless.

"There are 40 crore smartphones in the country today. Everything is available on mobile banking, net banking and through credit and debit cards. You just need to download an app on your phone, and for 40 crore people, everything is possible without visiting a bank or standing in queues," he said.

Modi also hit out at those saying people were resisting change or were technologically challenged, saying "they should remember that the same people elected a new government by pushing a button."

"Some people have lost glow on their faces... earlier they used to chant money-money, now they are chanting Modi-Modi," he said.

He said to eradicate poverty from country, it has to be removed first from big states like Uttar Pradesh, Bihar, Maharashtra and West Bengal.

Modi cited the example of Madhya Pradesh to highlight the efficiency of BJP rule. "Madhya Pradesh was considered a 'Bimaru' state. But the people of MP gave BJP a chance. The state government there, led by Shivraj Singh Chouhan, has transformed the state. Today, Madhya Pradesh is a shining example of efficiency," he added.