This was the first visit by an Indian Defence Minister to Uzbekistan in about 15 years. 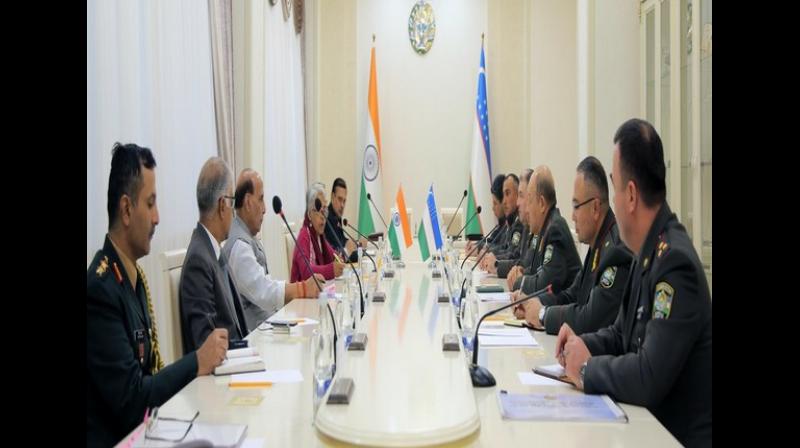 The release said the defence ministers agreed that the two sides would continue to work together to further raise their level of engagement in the defence sphere in keeping with strategic partnership between India and Uzbekistan. (Photo: ANI)

This was the first visit by an Indian Defence Minister to Uzbekistan in about 15 years.

According to a government release, during the meeting, both sides expressed satisfaction at the enhanced level of defence engagement between India and Uzbekistan since the visit of the then Defence Minister of Uzbekistan to India in September 2018.

This enhanced level of engagement is reflected in the first-ever meeting of the JWG on Defence Cooperation in February 2019, visit of Defence Secretary of India in March 2019 and the first-ever Defence-Industry Workshop organised in Tashkent in September 2019.

India has offered a concessional line of credit of USD 40 million for procurement of goods and services by Uzbekistan from India.

The direct exchanges related to training, capacity building and education between the Armed Forces on both sides has also witnessed a significant upswing.

The release said the defence ministers agreed that the two sides would continue to work together to further raise their level of engagement in the defence sphere in keeping with strategic partnership between India and Uzbekistan.

This would be based on higher level of mutual trust and respect between the two countries and on their shared views and approaches on a range of regional and international issues, including promoting regional stability and security and combatting extremism and terrorism.

Following the meeting, the two sides concluded an MoU on cooperation in the field of Military Medicine between the Armed Forces of the two countries. In the coming days, the sides will continue discussions at the expert level to further enhance their exchanges in this sphere.

"Two Institution-to-Institution MoUs on training and capacity building between institutes of higher military learning of the two countries were also signed. The MoU is a byproduct of interactions emanating from the MoU on Military Education signed between the two countries in October 2018," it informed.

The two defence ministers also witnessed the first-ever exchange over a video-link between College of Defence Management in Secunderabad and Armed Forces Academy of Uzbekistan in Tashkent.

The Defence Minister and his Uzbek counterpart jointly presided over the 'curtain raiser' of the first-ever India-Uzbekistan Joint Exercise 'Dustlik 2019' on November 3, 2019.

The exercise will be conducted from November 4 to 13, 2019 at Chirchiq Training Area near Tashkent and will be focused on counter-terrorism, an area in which the two countries share a common concern.

In the exercise, an Indian Army contingent will train along with Uzbekistan Army.

The exercise will enable the sharing of best practices and experiences between the Armed Forces of the two countries and would lead to greater operational effectiveness.

The statement informed that Singh invited Maj Gen Kurbanov to visit India to continue this high-level political-military dialogue between India and Uzbekistan.