Sardar Patel, however, became president of the Karachi session of the INC in 1931. 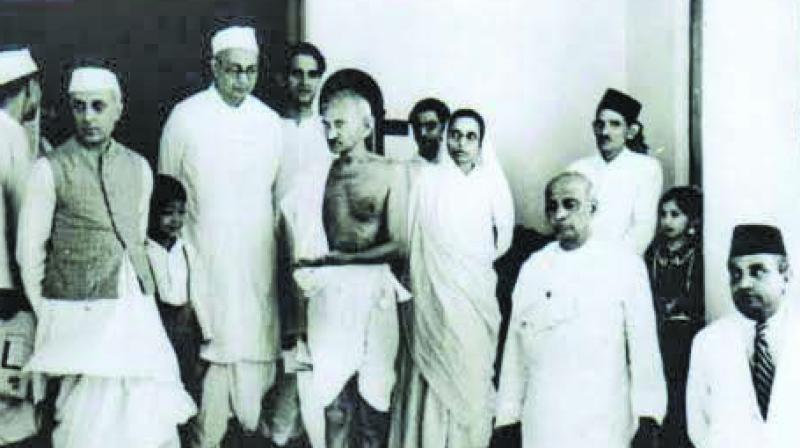 The Nagpur session of the Indian National Congress (INC), in December 1920, when the first major battle against imperialism, the Non-cooperation Movement was launched, was a turning point in the history of freedom movement. With this session, Mahatma Gandhi emerged as the supreme leader of not only the Congress but the entire country. Earlier, after his return from South Africa, in January 1915, Gandhiji had taken up the cause of Indigo planters in Champaran (Bihar), the textile workers in Ahmedabad and the peasants of Kheda (Gujarat). But these were all outside the framework of INC.

It was at Kheda where Vallabhbhai Patel, later to become popular as Sardar Patel, first came into contact with Gandhiji and impressed him with his organisational ability, earnestness and determination in getting relief for the farmers. Vallabhbhai soon became a close lieutenant of the Mahatma, gave up his legal practice, and plunged into the independence movement playing an active role in the Non-cooperation Movement in his home state of Gujarat.  At the annual session of the Congress held in Ahmedabad, in 1921, Vallabhbhai was elected Chairman of the Reception Committee that virtually made him the most prominent leader of the Gujarat Congress. But it was the Bardoli Satyagraha, in 1928, that saw the emergence of Vallabhbhai Patel as a national leader with the honorific title of “Sardar”. The provincial government had increased the land revenue in Bardoli taluka (Surat district) without any justification. Vallabhbhai started a non-violent resistance movement against the unjust demand of the government.  He advised the people to refuse to pay their land revenue dues. He went from village to village infusing the people with national spirit and boosting their morale. The Bardoli Satyagraha shook the imperial government and it expressed its readiness for negotiations which ultimately settled the dispute. With Bardoli that conferred on him the title of “Sardar”, Vallabhbhai became a national hero. So tall had his stature become that Pandit Motilal Nehru recommended his name for the presidentship of the 1928 Calcutta (now Kolkata) session of the INC. Wrote Motilal Nehru to Gandhiji on July 11, 1928: “ — Now comes the question of the crown. I am clear that the hero of the hour is Vallabhbhai, and the least we can do to appreciate his public services is to offer him the crown.” But Gandhiji was thinking far ahead. He had made up his mind to offer the “crown” to Motilal Nehru himself as prominent Bengal leaders, including Subhas Chandra Bose and J.M. Sen Gupta, though belonging to opposite camps, had pitched in very strongly for Motilal Nehru to be the president for the Calcutta Session.

Sardar Patel, however, became president of the Karachi session of the INC in 1931. Earlier, in 1929 Pt. Jawaharlal Nehru was elected President of the Lahore session where a call was given for Purna Azadi (complete independence) for the first time. Equally important as the Lahore session, the Karachi session passed a resolution on economic policy and fundamental rights. Some of the salient features of the resolution, like universal franchise and equality of religions, were later incorporated in the Constitution of India. The Karachi session also ratified the Gandhi-Irwin pact which had been signed earlier between Gandhiji and Viceroy Lord Irwin.

Jawaharlal Nehru again became president of INC in 1936 and 1937 when elections were held to the Central Assembly and Provincial Assemblies under the 1935 Act. The Congress won in most of the provinces and formed governments in other provinces, in coalition with smaller parties and independents. The Muslim League won only in two provinces and lost even in seats reserved for Muslims in non-Muslim majority provinces.

The outright victory in the elections was primarily due to Nehru’s charisma and aggressive campaigning, on one hand, and on the other, organizational skills of Vallabhbhai Patel.  E.M.S. Namboodripad observes in India’s Freedom Struggle: “Nehru to attract the masses and secure their votes, and Patel to control the ministries after winning the elections —such was the division of labour inside the Congress.”  This enabled Gandhiji to remark in December 1937 that “I have cast all my cares on the broad shoulders of Jawaharlal Nehru and Sardar Vallabhbhai Patel”. C. Rajagopalachari, Patel and Rajendra Prasad were considered the “Old Guards” in the Congress who, on many occasions, differed with the young leaders led by Nehru and Bose. Earlier, when the manifesto for the provincial elections was finalised, Patel wrote to Gandhiji: “We have been getting on beautifully this time — I cannot speak too highly of Jawaharlal, we found not the slightest difficulty in co-operating with him.”

After the failure of the Cripps Mission, Gandhiji prepared the country for its final battle against imperialism. The AICC met in Bombay (now Mumbai) on August 8, 1942, and passed the “Quit India” resolution which was moved by Nehru and seconded by Sardar Patel. The slogan “Karo ya Maro (Do or Die)”, coined by Mahatma Gandhi, inspired millions of Indians to free themselves from the shackles of slavery even at the cost of their lives.

On the morning of August 9, 1942, Gandhiji and all the front ranking leaders of Congress were arrested and taken to different destinations for long jail terms that followed. Patel, alongwith Nehru and the then Congress president Maulana Azad, were incarcerated in Ahmedabad Fort. The Sardar spent two years and nine months in jail in the distinguished company of Azad and Nehru who completed his last magnum opus, The Discovery of India, before completion of their jail term in mid 1945.

When the interim government was formed on September 2, 1946, with Nehru as the vice-president of the Executive Council (the Viceroy being the president), Sardar Patel was given the home portfolio alongwith information and broadcasting.  On August 1, 1947, Nehru, the Prime Minister designate wrote to Sardar Patel formally inviting him to join his Cabinet: “The writing is superfluous because you are the strongest pillar of the Cabinet.” Patel wrote back: “My services will be at your disposal, I hope, for the rest of my life and you will have unquestioned loyalty and devotion for me in the cause for which no man in India has sacrificed as much as you have done. Our combination is unbreakable and therein lies our strength.”

Sardar Patel became India’s first Deputy Prime Minister and was allocated the portfolios of Home, States and Information and Broadcasting. Thereafter, began the vital task of consolidating India’s newly won freedom. He integrated 562 princely states within the Indian Union with tact, vision and statesmanship. According to former Prime Minister Morarji Desai “the integration of the states could certainly be termed as the crowning achievement of Vallabhbhai Patel’s life.  But for him, this may not have been achieved easily and quickly”.

Born on October 31, 1875, at Nandiad in Gujarat, Sardar Patel died in Mumbai on December 15, 1950. Prime Minister Nehru had the Parliament assembled within an hour after Patel’s death and paid a touching tribute to his colleague of 30 years in freedom struggle and formative years of independence. Calling Sardar Patel as the “builder and consolidator of New India”, Nehru stated: “We shall remember him as a friend and a colleague and a comrade above all, and I, who have sat here on this bench side-by-side with him for these several years, will feel rather forlorn and a certain emptiness will steal upon me when I look at this empty bench.”

Only a year earlier, Sardar Patel in a message to a publication brought out on the sixteeth birthday of Jawaharlal Nehru had written: “Having known each other in such intimate and varied fields of activity we have naturally grown fond of each other, our mutual affection has increased as years have advanced — how much we miss each other when we are apart — No one knows better than myself how much he (Nehru) has laboured for his country in the last two years of our difficult existence.”

Such were the emotional and close bonds between Jawaharlal Nehru and Sardar Patel. Those who are trying to break this “unbreakable combination” by distorting and twisting historical facts today do not realise the disservice they are rendering to the memory of Sardar whose name they often invoke for their narrow political objectives. In November 1948, 10 months after Gandhiji’s assassination that led to a ban on RSS Patel had said: “Since Gandhiji's death we have realised that our leader's judgement was correct.” Those in power today obviously cannot be wiser than Gandhi and Patel.

The writer, an ex-Army officer, is a former member of the National Commission for Minorities and a political analyst