After a purported video of CM Yediyurappa surfaced, Congress and JD-S accused BJP of misusing govt agencies for poaching their MLAs. 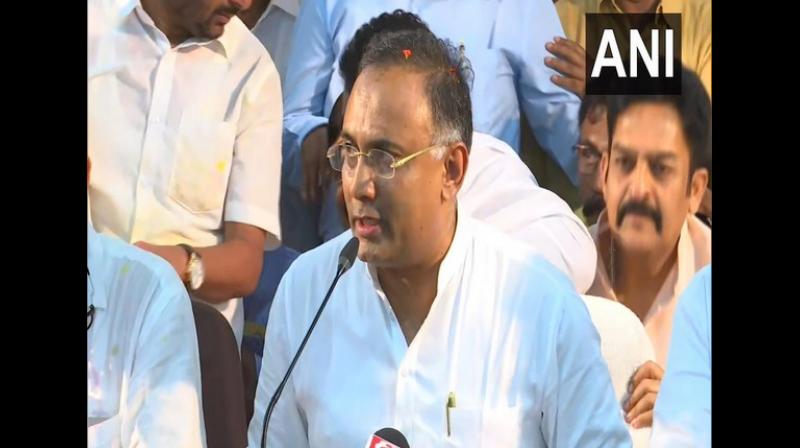 'Tomorrow morning the Congress will submit an audiotape of Yediyurappa to the Supreme Court,' said Rao, while speaking to media persons. (Photo: ANI)

Bengaluru: The state unit Congress chief Dinesh Gundu Rao on Sunday claimed to have the proof of 'Operation Kamala' and will submit the audiotape of Chief Minister BS Yediyurappa to the Supreme Court.

"Tomorrow morning the Congress will submit an audiotape of Yediyurappa to the Supreme Court," said Rao, while speaking to media persons here.

"I think you all are aware of the latest video of BS Yediyurappa related to poaching of Congress and JD-S MLAs. We have always said the BJP is misusing government agencies to poach MLAs. Now it is established beyond doubt. We will approach the Supreme Court with the evidence," Congress general secretary KC Venugopal told reporters.

On Saturday after a purported video of Chief Minister Yediyurappa surfaced, Congress and JD-S accused the BJP of having misused government agencies for allegedly poaching their MLAs in the state.

Former Chief Minister HD Kumaraswamy, who headed the coalition government for 14 months, said the people will judge the BJP.

He also said the Chief Minister has no right to hold a constitutional post.

In the video that has gone viral, Yediyurappa purportedly says that the decision of the 17 JD-S and Congress MLAs to resign, which led to the fall of HD Kumaraswamy-led government in July, was taken by the Central leadership of the BJP and that the party workers should honour the "sacrifice" of the rebel MLAs.

The video was allegedly shot during his meeting with the party leaders in Hubli on October 26.

"Today, I did not feel that you people are trying to save this government after the way you spoke ... We did not speak about the issue of disqualified MLAs till now because we are expecting the Supreme Court judgment. We are expecting that they may get relief from the court and they will get the chance to contest," the Chief Minister is heard saying in the video.

Following their resignations, a number of Congress and JDS MLAs stayed at a hotel in Mumbai. Yediyurappa took oath as Chief Minister on July 26 after the coalition government led by Kumaraswamy failed to win the trust vote.

The 17 MLAs were disqualified in July by then Karnataka Assembly Speaker KR Ramesh Kumar and were barred from contesting polls for the duration of the assembly, which ends in 2023.

The Election Commission of India had earlier deferred the assembly by-polls in Karnataka to December 5 as the case pertaining to the disqualification of 17 MLAs was being heard in the Supreme Court.