Some oppn leaders are lying machines, fire off lies like AK 47: PM Modi

Modi accused the opposition of telling lies against his government and said people now had many means to find correct information. 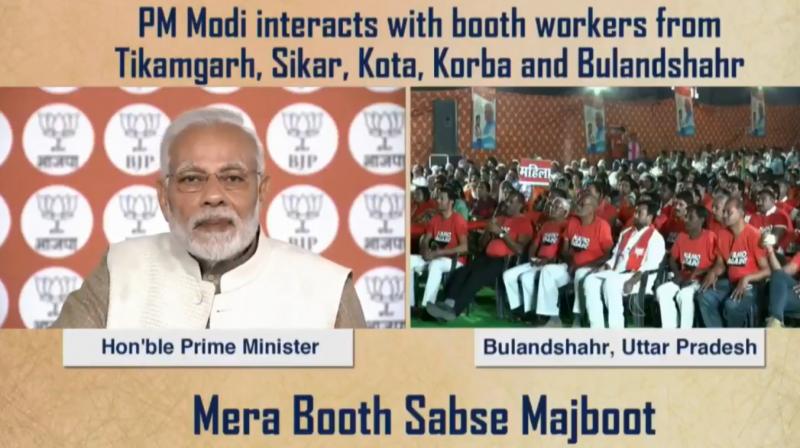 In a reference to his and the BJP-led state governments, Modi said while they were working to change the country's destiny, the opposition was concerned about its ruling dynasties. (Photo: Twitter | @narendramodi)

New Delhi: Prime Minister Narendra Modi said Saturday while opposition parties were joining hands to protect their ruling dynasties, the BJP worked to change the country's destiny, as he dubbed some rivals as "lying machines who fire off lies like AK-47".

Modi asked BJP workers not to be concerned with the alliance of opposition parties, saying people do not accept them and even "hate" them for their negative works, refusal to recognise the country's good works and "abuses and insults" for the Army.

His comments targeting the alliance of opposition parties came after a BJP worker sought his response during a video interaction on the coming together of "anti-national" forces like the communists and Congress whenever he takes a step to "protect" Indian values.

Responding to another question in the interaction with party workers of five Lok Sabha constituencies, he accused the opposition of telling lies against his government and said people now had many means to find the correct information.

"Some leaders are like lying machines. Whenever they open their mouths, they fire off lies like AK 47," he said, asking Bharatiya Janata Party (BJP) workers to unmask their lies by taking correct information to the masses.

Modi made a reference to a WhatsApp post in which, he said, media persons found that people attending a recent opposition's protests had little idea about the reasons for which they were raising slogans against him. They became a laughing stock, he said. Some opposition leaders give many different figures in a day, Modi said. However, he said, people know the truth and if a party worker speaks to 100 persons his confidence will grow many times.

Though the prime minister did not name any rival, the BJP has been taking on Congress president Rahul Gandhi for allegedly citing different figures related to the Rafale deal, described as a scam by him. In a reference to his and the BJP-led state governments, Modi said while they were working to change the country's destiny, the opposition was concerned about its ruling dynasties.

Opposition parties are coming together as their leaders wanted to leave behind something for their sons, he said. They fear what will happen to 200-500 dynasties if the BJP remains in power for five to 10 more years, Modi said, adding that these families have had a tight hold over the country since its independence.

"Due to this concern and to protect their dynasties, they have come together. They are concerned that they should leave something behind for their progenies," Modi said.

He was apparently referring to growing attempts among opposition parties like the Congress, the Left and many regional outfits to put up a united fight against the BJP in the 2019 Lok Sabha polls. Modi also asked party workers to stay updated with the latest information about his government's works through his app and publicise it among the masses. They should also compare his government's works with the previous dispensations as people tend to forget about the past, he said.

Referring to the big jump India saw in its ease of doing business ranking and a slew of measures announced by him for the micro, small and medium enterprises, Modi said a "virtuous cycle" had begun and that India's potential was now leading to performance and progress.

It will then lead to higher potential, better performance and more progress, he said. India's ranking in the ease of doing business had jumped to 77 from 142, and it was a recognition of the country's development and reforms, the prime minister said.