The TMC also retained two more Assembly seats in Murshidabad, where the polls were deferred earlier, by huge margins 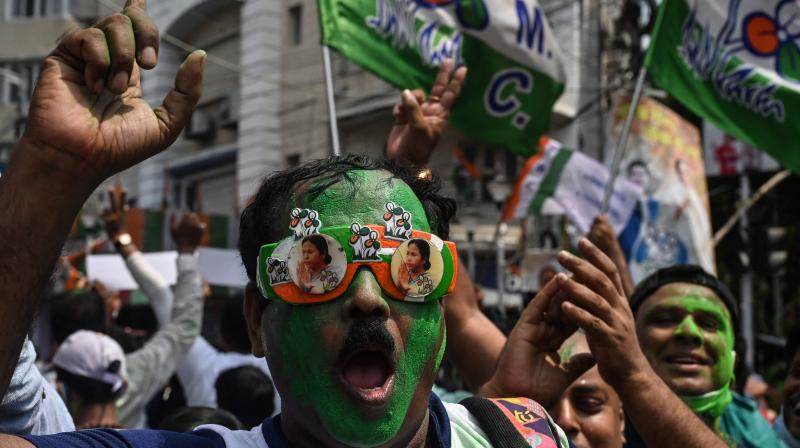 Five months after her controversial defeat to Suvendu Adhikari of the BJP at Nandigram in the West Bengal Assembly elections, a wounded Trinamul Congress supremo Mamata Banerjee on Sunday bounced back, winning as an MLA from Bhowanipore again in a byelection by breaking all her past records of victory margins on her home turf to continue as the state’s chief minister.

Former state minister Zakir Hossain and TMC candidate Amirul Islam won the Jangipur and Shamshergunj seats by 92,232 votes and 26,111 votes respectively. With the victory in the three seats, the TMC's tally in the Assembly has gone up to 220, including four defections from the BJP, out of 294 in the state at present.

Ms Banerjee appeared so satisfied with her return to the House as an elected member that she highlighted the importance of Bhowanipore in state politics and how she broke her own victory margin records there.

The TMC chief said: “I extend my gratitude and congratulations to those who, across Bhowanipore, the state and the country, eagerly waited for this result. My mind is filled with joy as Bhowanipore has showed the way. The entire Bengal was extremely hurt when we won most seats except one, over which a case is pending. There are reasons why and how I lost in that seat. I will not comment on it as the matter is sub judice. A lot of conspiracies were hatched. But they were foiled by the people of Bhowanipore, who encouraged me. I am indebted to them.”

She added: “The number of voters are fewer in Bhowanipore compared to Shamshergunj and Jangipur. The total number of votes polled this time was around 1.15 lakh. In 2011, I won as CM in a bypoll here by 54,000 votes. We had a 44 per cent voteshare, which was also the total votes polled then. In 2016, I won here by around 25,000-26,000 votes. In the last Assembly poll, our candidate Sovandeb Chatterjee won by 28,000 votes with polling of 57 per cent. This time I won by 58,832 votes. I also did not lose in any ward. It was a challenge since I earlier got less votes in one or two wards in 2016. Bhowanipore has 46 per cent of voters who are non-Bengalis, including Punjabis, Gujaratis, Marwaris, Marathis and others.”

She then announced her party’s tickets for Mr Chatterjee at Khardah, Udayan Guha at Dinhata, Brajakishore Goswami at Santipur and Subrata Mondal at Gosaba for another round of Assembly bypolls on October 30.

Ms Tibrewal alleged on Sunday: “There were massive false voting in many wards. In Ward No. 74, I lost by only 121 votes. It cannot be a defeat in a real sense. We also caught fake voters. A candidate without an organisation cannot win or lose an election. The organisation also fights. I admit that our organisation was weak. We have to work more.”

Stung by her comments, state BJP chief Sukanta Majumdar said: “We congratulate Ms Banerjee on her victory and accept the people’s verdict like earlier. But questions remain about the reflection of the reality in the results since the majority of the people neither could nor did go to cast their votes.”