India   All India  03 Oct 2018  Thousands of farmers call off protest after being allowed to enter Delhi
India, All India

The protest came to an end when Delhi Police removed barricades post-midnight to allow farmers to enter Delhi. 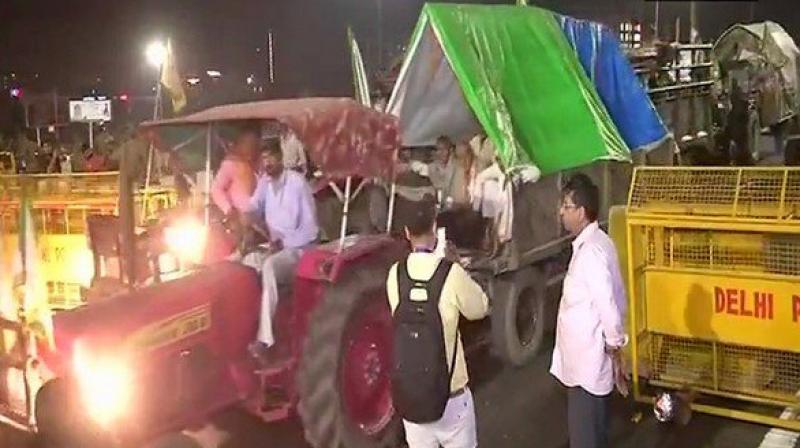 The farmers entered the national capital riding their tractors and trolleys and proceeded towards Kisan Ghat. (Photo: ANI)

New Delhi: The 'Kisan Kranti Padyatra', which began on September 23 and was spearheaded by the Bharatiya Kisan Union, ended at Kisan Ghat in the national capital in the wee hours of Wednesday.

The protest march came to an end when the Delhi Police removed barricades post-midnight to allow farmers to enter Delhi and proceed towards Kisan Ghat, said a senior police officer.

The farmers entered the national capital riding their tractors and trolleys and proceeded towards Kisan Ghat where heavy police deployment has been made, he added.

"The 'Kisan Kranti Padyatra' that started on September 23 had to end at Kisan Ghat. Since Delhi Police did not allow us to enter, we protested. Our aim was to finish the yatra, which we have done now. Now we will go back to our villages," Bharatiya Kisan Union president Naresh Tikait said.

Thousands of farmers on Tuesday marched towards Delhi over demands ranging from farm loan waiver to cut in fuel prices, blocking traffic movement on arterial roads leading to the national capital.

They carried banners of Bhartiya Kisan Union, which gave the call for the march to press for a series of demands. Their list of demands include unconditional loan waiver for farmers, clearing of dues by sugar mills, higher prices for crops, free electricity for farms and a cut in diesel prices.