Suvi Sundravari, 30, from Dhadgaon, whose little one rests comfortably in her arms, looks on quietly at the group. 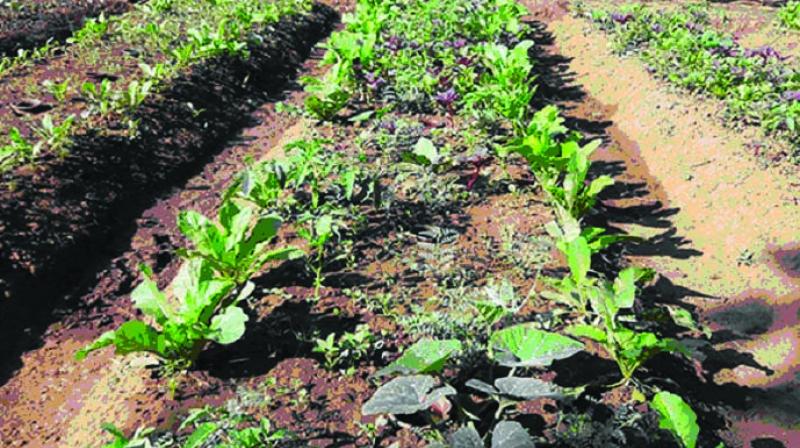 Maharashtra: As the anganwadi workers (AWW) at the Nutrition Rehabilitation Centre (NRC) in Dhadgaon, a distant block in Maharashtra’s tribal-dominated Nandurbar district, start humming this Bhil lullaby, the small group of young mothers gathered around them join in shyly. These women are present at this specialised government health facility, which can admit up to 20 children and their mothers, because each one of them is struggling with the care of their extremely underweight infant. The NRCs have been set up to ensure quality medical care and nutritional support to children with severe acute malnutrition (SAM), defined by a very low weight for height, visible severe wasting, or by the presence of nutritional oedema. They need a rigorous antibiotic course and therapeutic food-based treatment for minimum 14 days. Additionally, the NRCs focus on improving the care-giving skills of the mother and explain proper feeding practices so that the baby continues to receive adequate care at home.

Suvi Sundravari, 30, from Dhadgaon, whose little one rests comfortably in her arms, looks on quietly at the group. At six months, her “bachchu” weighs a mere three kg and she has to stay at the NRC till her fifth-born attains the regular weight gain and appetite to catch up with the expected weight for her age and height. While severe malnourishment has impeded her child’s growth, Suvi sometimes gets in two minds about spending longer periods at this facility. When she has doubts, her AWW, Mogra Tadvi, and Uday Singh Pawra, the UNICEF resource person in the area, cajole her to keep patient. Of course, Suvi isn’t the first mother they have encountered, with whom they have to reason out the need for adhering to a proper nutrition and care-giving routine for themselves and their newborns. In this tribal region, indigence and insufficient information join hands to make sure that the community, and particularly the little ones, cannot break free from the cycle of malnutrition and ill health.

The Bhil ditty tellingly enumerates the foods tribals of Nandurbar consume nowadays. It’s a limited fare of lentil and sorghum, which as such is not unwholesome; it’s just not nutritionally balanced. If, till a few decades back, they had ready access to an assortment of forest greens, rich in vitamins and minerals essential for maintaining good health, today, owing to rampant deforestation and climate change, there has been a notable loss of biodiversity and key forest produce, which was the mainstay of tribal life and livelihood.

Gone are the “paras baags” (backyard kitchen gardens), the edible wild greens and fruit, the prey animals; large tracts of wooded mountain sides have been cleared for resettling communities displaced due to extensive infrastructure work being executed in the region. Naturally, the greatest impact of this deprivation has been on the nutritional status of the rural tribal communities, with lactating women and their babies being the worst sufferers. According to the World Health Organisation (WHO), mortality among severely malnourished children is nine times higher as compared to normal children. And whereas 90 out of 100 malnourished children can be nursed to health by the AWW at the village/community, the remaining will require expert treatment and care at nutrition rehabilitation centre or the child treatment centre.

“Though it’s been difficult breaking the vicious cycle of malnutrition in Nandurbar, there are some simple, cost-effective interventions that can make a real difference to the quality of life for the mother and child. One such initiative is the Nutrition Garden Programme, under which, UNICEF has been encouraging families to cultivate a kitchen garden while simultaneously undertaking a rigorous nutritional awareness drive in the community. The idea is to revive the ‘paras baag’ tradition by informing and educating them about the importance of a balanced, sustained intake,” says Dr Prashant Hingankar, UNICEF consultant working in the district.

On the one hand, the Nutrition Garden Programme that started in 2017 in Nandurbar, provides support to the local tribal population to grow a small patch of vegetables and herbs at home, thus ensuring a limited but steady availability of much-needed greens in their diet. On the other hand, it’s also an attempt to restore the traditional knowledge of indigenous food varieties that is mostly lost to the newer generation of tribals. “A well-developed home garden can supply most of the non-staple foods that a family needs every day of the year and we are hopeful that this will have a positive influence on the health status of the people here,” says Nitin Vasiakar, district coordinator, UNICEF.

Before the programme was initiated, the district UNICEF team and a group of AWWs who were trained by UNICEF’s Chhattisgarh team, which has successfully empowered the local tribals to cultivate flourishing nutrition gardens in an otherwise deforested and water scarce region. Vasiakar, along with resource persons like Pawra and others, carried out a study documenting the native vegetation with the assistance of community elders and even collected seeds and saplings for distribution.

Hard-working tribal women are central to the implementation of this programme. “At the onset, selected women received training to create and nurture nutrition gardens in the vicinity of the government schools and anganwadis to make available vegetables for the mid-day meals and the feeding programme in the anganwadi. In time, we are confident the women will start putting these good practices to use in their own homes, instilling proper food and hygiene habits in the family,” elaborates Vasiakar.

Adds Jeetendra Valvi, UNICEF district resource person: “At the same time, the gardens promote agricultural best practices. A four-inch deep trench is dug up and a mound of nine-inch, measuring four feet-by-10 feet is created. Earthen pots filled with water are embedded in the land, which helps check loss of moisture due to evaporation and provides just enough water to the roots. After the monsoon, households will channelise the waste water to the patch.” The tribals have already started planting and harvesting bhindi (okra), gawar (a variety of green beans), peas and cabbage besides a variety of leafy greens. Together these provide key vitamins like A, E and C; protein; fats and minerals like iron and folate.

The gardens of change have begun bearing fruit and fresh vegetables! “The sustained efforts of the state government and UNICEF, in reaching out to tribal communities, through relevant information, education and communication (IEC) materials and activities are slowly bringing about a desired transformation,” says Mallinath Kalshetti, district collector, Nandurbar. Yet with 27 per cent underweight children below five years, and 3.21 per cent severely acute malnourished children in the district, the challenges are far from over. Kalshetti is acutely aware of the limited livelihood options in the area, which trigger massive migration to nearby Gujarat for nearly eight months in the year. “When they migrate for work many develop multiple health complications and all our effort at improving their well-being comes to a naught,” he adds.

Access to sustainable livelihood plays a vital role in maintaining the health and security of any community. Shares Savina Vasave, 28, Asha worker at Molgi village in Akkalkua block. “In tribal families, the mother has to leave her younger children in the care of the older ones. They have to look for farm work or do chores like fetching firewood or water. Often the food the infant eats is nothing more than a dry roti with little dal, if at all. At times, the older child buys glucose biscuits to feed the young one. That’s how they develop acute deficiencies.”

Of course, the hope is that with a small nutritional garden in every household, stories such as these will soon be a thing of the past. Although it’s early days, the initiative will be a game changer for the tribal communities in the years to come. Indeed, the “baags” will enjoy their share of “bahaar” (spring bloom).