The demands of farmers include waiver of farm loans, clearance of pending payments and implementation of the Swaminathan Committee Report. 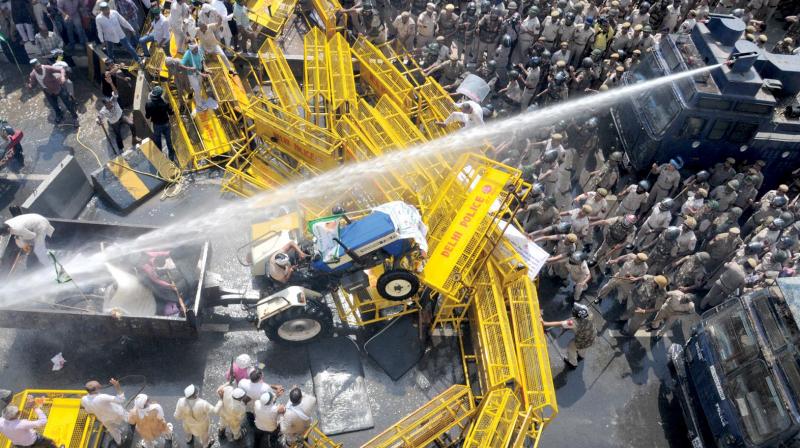 Policemen use water cannons as a farmer rams his tractor into the barricades at Ghazipur near the Delhi-UP border during the “Kisan Kranti Padyatra” in New Delhi. (Photo: G.N. Jha)

New Delhi: A “long march” by farmers from Hardwar to Rajghat in Delhi seeking loan waivers from the government, among other things, turned into a pitched battle with the police as thousands of agitators were stopped from entering the national capital. The Opposition parties, including the Congress, Left, BSP, RJD, SP and AAP, were quick to express solidarity with the farmers, lending a political hue to the entire agitation.

The Kisan Kranti Padyatra was due to enter the capital on Tuesday, October 2, the birth anniversary of both Mahatma Gandhi and former Prime Minister Lal Bahadur Shastri, who had coined the slogan “Jai Jawan, Jai Kisan”, and to culminate at Rajghat, the samadhi of Mahatma Gandhi. However, they were stopped by the polkice at the Delhi-UP border.

While the government rushed to cool tempers after the clashes with the police, with minister of state for agriculture Gajendra Singh Shekhawat holding meetings with the farmers, a delegation of agriculturalists which met Mr Shekhawat rejected his assurance that the Centre was actively considering the demands and said that the protests and agitation “will not stop”.

Seeking to convince the farmers to move back from their protest, the government even announced that a chief ministers’ committee would look into their demands, but the protesters stayed put, saying they were not “satisfied” with this assurance.

Naresh Tikait, chief of Bharatiya Kisan Union (BKU), which has given the protest call, said the farmers are “not satisfied” with the government’s assurance. “We will discuss this and then decide on the future course of action. I cannot decide anything alone, our committee will take the decision,” he added.

The demands of farmers include waiver of farm loans, clearance of pending payments and implementation of the Swaminathan Committee Report.

After the police action on the farmers, the Opposition parties put the blame on the Narendra Modi government. The Congress alleged that the “Badshah of the Delhi Sultanate was drunk with power”.

In Lucknow, Bahujan Samaj Party supremo Mayawati termed the police lathicharge on farmers the “height” of anarchy and warned that the BJP should be prepared to face consequences. “This is the height of the BJP government’s anarchy and it shall remain prepared to bear its consequences... The BJP, which came to power promising to bring good days to farmers by doubling their incomes, has targeted them with teargas shells and lathis when they only wanted to march to Rajghat and hold a demonstration over their problems,” she said. Most Opposition parties, accusing the government of being anti-farmer, said it should have allowed protesters to enter Delhi peacefully to air their grievances. The Delhi police, however, insisted that it had only used the “minimum required force” as a section of protesters, who were participating in the BKU march, suddenly turned violent as the police tried to persuade them not to break the barricades. Seven policemen, including an assistant commissioner, were injured as the farmers got violent while trying to enter the city from Uttar Pradesh in defiance of prohibitory orders, the police claimed. Since early Tuesday morning, the farmers had gathered at the Ghazipur border between Delhi and Ghaziabad in their thousands. Announce-ments were regularly made on the public address system about the promulgation of prohibitory orders and requests were specifically made not to attempt entry into Delhi forcibly on tractor-trolleys since there was no permission for this. The police said it had specially deployed buses for ferrying the farmers to the city. Talks were also going on in this regard with the leaders of various factions of protesters, the police said. But despite requests that the protesters wait for the outcome of the talks between their leaders and the government, a section of the crowd suddenly turned violent and tried to break the barricades with tractor-trolleys and were also carrying lathis, the police said. “Tractor-trolleys were used with violent force by this aggressive section to break down three layers of strong barricading. Some protestors also resorted to stone-pelting and wielded lathis, causing injuries to police personnel deployed on duty,” a police statement said.

Congress president Rahul Gandhi accused the BJP of “brutally beating up” farmers at the Delhi border on the International Day of Non-Violence, and said they cannot even air their grievances in the nation’s capital. Tweeting in Hindi, Mr Gandhi said: “On the International Day of Non-Violence, the BJP’s two-year Gandhi Jayanti celebrations began with the brutal beating of farmers peacefully coming to Delhi. Now farmers cannot even air the grievances coming to the capital!” The Congress Working Committee, which was meeting at Wardha, adopted a resolution strongly condemning the police action against the farmers.