‘Deepotsav’ to get bigger, grander

The Mayors of Ayodhya and Kim-Hae city of South Korea signed a ‘Sister City Bond’ in March 2001. 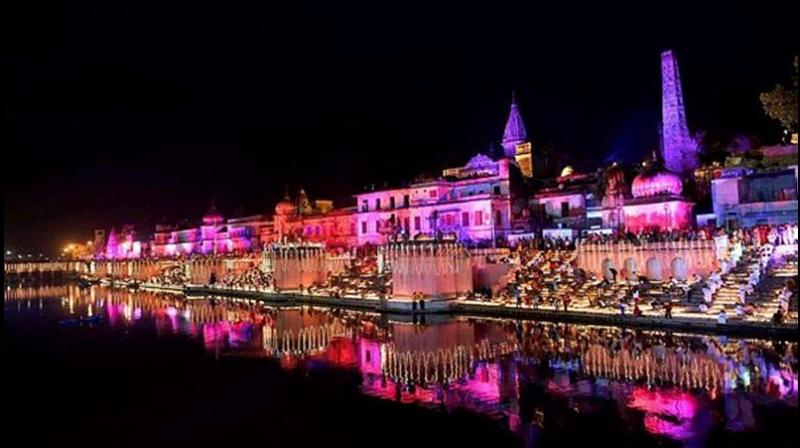 The ‘Deepotsav’ in 2017 was a one-day celebration but this year, it will be a three day event form November 4 to 6. (Photo: PTI/ Representational Image)

Lucknow: The ‘Deepotsav’ festival on Diwali in Ayodhya, this year, will be bigger and much grander compared to last year.

The ‘Deepotsav’ in 2017 was a one-day celebration but this year, it will be a three day event form November 4 to 6.

A three-dimensional 30 feet tall statue of Lord Ram will be the main attraction of the ‘Deepotsav’ this year with ‘Jatayu’, the bird that tried to save Sita when Ravana was abducting her, flying in the air.

Devotees will enter the Ram Katha Park through the ‘heart’ of Hanuman and 20-feet ‘paduka’ (footwear) of Lord Ram will also be on display. Bharat had ruled Ayodhya for 14 years, keeping ‘paduka’ of Lord Ram on the throne.

Last year, Lord Ram, Sita and Laxman had arrived for the ‘Deepotsav’ on a helicopter and this time, the three will be accompanied by the ‘vanar sena’ (army of monkeys).

Ayodhya Research Institute director Dr Y.P. Singh said that on November 4, an open competition on Ram Darbar will be held.

He said that artists from countries like Indonesia. Cambodia, Trinidad, Sri Lanka and Malaysia will enact the Ram Lila.

Additional chief secretary tourism Avanish Awasthi said that on November 6, the foundation stone of a memorial dedicated to Queen Ho of South Korea who belonged to Ayodhya.

The story of Queen Ho dates back to 2000 years when the 16- year- old princess from Ayodhya, accompanied by her brother, sailed to Korea and married King Kim Suro. The King later built a temple at the place where they first met.

The Mayors of Ayodhya and Kim-Hae city of South Korea signed a ‘Sister City Bond’ in March 2001.

Besides, there will be special fireworks to light up the skies and ‘rangoli’ decorations on the streets of Ayodhya. The entire city will be illuminated and a laser show and a water [projection show  will also be held.

According to sources, the chief minister wants Deepotsav this year to be a memorable event. The idea is obviously to give a massive push to ‘Hindutva’ and ‘make every Hindu proud’.

“Coming before Kumbh Mela, the Deepotsav will showcase the ability of the state government to hold an event of this scale. The celebrations will be on an international level and we expect foreign tourists to come,” said an official.