90 per cent of toilets constructed being used: PM Modi

The Prime Minister also interacted with students on the occasion. 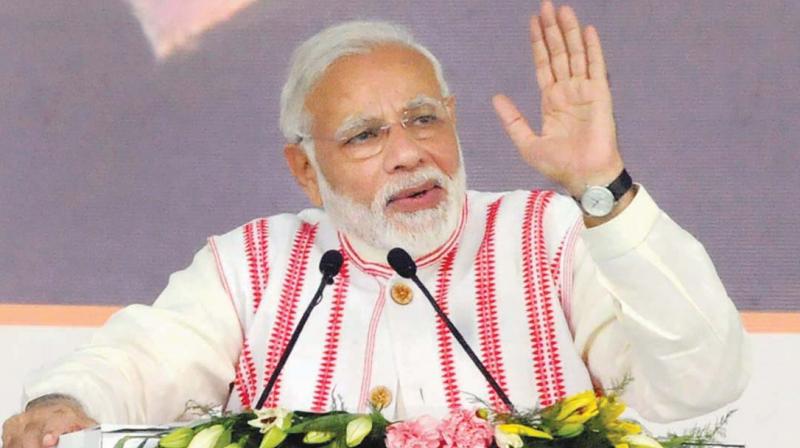 He said till four years ago, India’s share in the world’s population that practised open defecation was 60 per cent, which has now come down to below 20 per cent.

Addressing the concluding session of the Mahatma Gandhi International Sanitation Convention here, Mr Modi said 90 per cent of the toilets constructed are being used even as the government carries out constant follow ups to ensure that cities declared open defecation free “do not fall back on old habits”.

“It is the result of public participation that rural sanitation has increased from 38 per cent before 2014 to 94 per cent now,” the Prime Minister said.

While 25 states have declared themselves as open defecation free, the number of such villages has gone up to 5 lakh, he informed.

In the 21st century, the thoughts of Gandhi remain as essential as they were in his time and offer solutions to several problems the world faces, he said.

“In a world where terrorism, radicalisation, extremism and mindless hate are dividing nations as well as societies, his clarion calls of peace and ahimsa have the power to unite humanity,” Mr Modi said in a blog written for select dailies.

“He remains a shining beacon of hope for millions of people across the world who seek a life of equality, dignity, inclusion and empowerment,” Mr Modi wrote.

He said people can follow Gandhi’s vision by doing simple things such as ensuring zero waste of food to imbibing values of non-violence and togetherness.

The Prime Minister also interacted with students on the occasion.

Prime Minister Modi met with the members of the “Sarvadharma Sabha”, after paying tributes to Mahatma Gandhi at the Gandhi Smriti.

In a series of tweets later, Mr Modi also thanked people from all walks of life for participating in “Swachhta hi Sewa” campaign.