Pakistan has denied the charge of violating ceasefire along the LoC, saying that Indian troops started firing in Poonch-Rawlakote area. 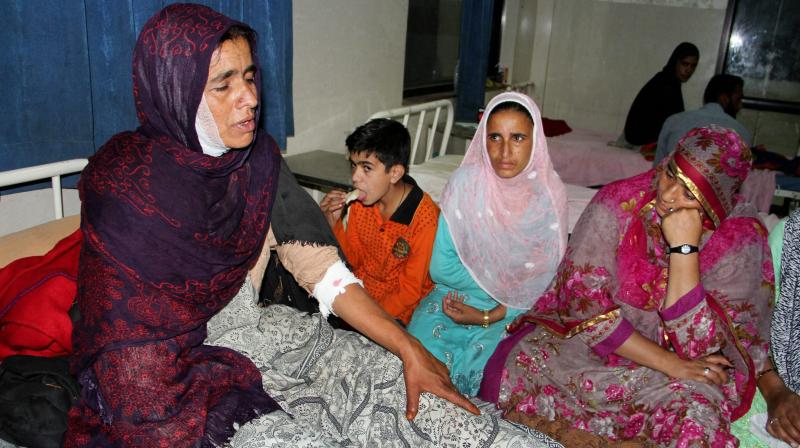 An injured being treated at a Government District Hospital in Poonch. (Photo: AP)

Srinagar: Three minors were killed and about a dozen other civilians were injured, a few of them seriously, when the Pakistani troops pounded civilian areas and forward military posts along the Line of Control (LoC) in Jammu and Kashmir’s Poonch district with mortars on Monday.

Later during the day, a BSF jawan was injured in sniper firing incident along the de facto border in neighbouring Rajuri district, officials said.

The critically injured civilians were airlifted to Jammu’s Government Medical College Hospital whereas the others are being treated at Poonch’s district hospital. The officials said that rescue teams sent to worst affected villages of Kerni, Shahpur and Dhigwar started work immediately.

As the shelling caused panic among the border-dwellers and many of them were preparing to leave, the authorities advised them to remain indoors and not to venture out to avoid more casualties.

Poonch’s DC Tariq Ahmed Zargar said that a 10-year-old boy Asrar Ahmad of Mohalla Qasba in the Kerni area and a 15-year-old girl Yasmeen Akhtar of Kerma village of Dighwar were killed in the shelling. A third civilian, identified as 16-year-old Tazeem Akhter, succumbed to her injuries later, taking the death toll to three.

A defence spokesman said in Poonch that the Pakistani troops resorted to “unprovoked heavy firing and shelling” in Kerni, Shahpur and Dhigwar sectors of the LoC at around 6. 50 am. “The Indian troops guarding the border effectively retaliated,” he said. The firing stopped at around 11 am. Several residential houses were damaged and a number of livestock perished in the firing and shelling from across the de facto border, he said.

He said that five children are among the injured, the youngest being five-year-old Zobia Kounsar who was airlifted to Jammu in a helicopter. Eight of the injured were being treated in a local hospital, DC Zargar said. Among them is a man and his three daughters. The police added that most of the casualties occurred in Dighwar sector which was worst hit in the shelling.

Chief Minister, Mehbooba Mufti, expressed grief and anguish over the killing of three minors and said, “It is very unfortunate that these teenagers became victims of fire power when they were yet to understand the nuances of politics”. She asked the district administration to ensure specialized treatment to the people injured in the shelling.

Her deputy and BJP leader Nirmal Singh Termed the “unprovoked” ceasefire violation by the Pakistan troops as ‘coward act.’ He said, “Pakistan is a terrorist state. On one hand, it is showing white flags but on the other, targetting innocent civilians.” He added that the Indian troops are “giving befitting reply to them”

But Pakistan has denied the charge saying that like in past instances of cross-LoC skirmishes, it were the Indian troops who initiated the firing in Poonch-Rawlakote area on Monday. The Pakistani authorities have also said that several people were killed in the Indian firing on their side of the de facto border past week, prompting them to summon India’s Deputy High Commission JP Singh to the Foreign Office is Islamabad to lodge protest.