A police official said, 'the third terrorist is also believed to have been neutralized but the search operation is going on.' 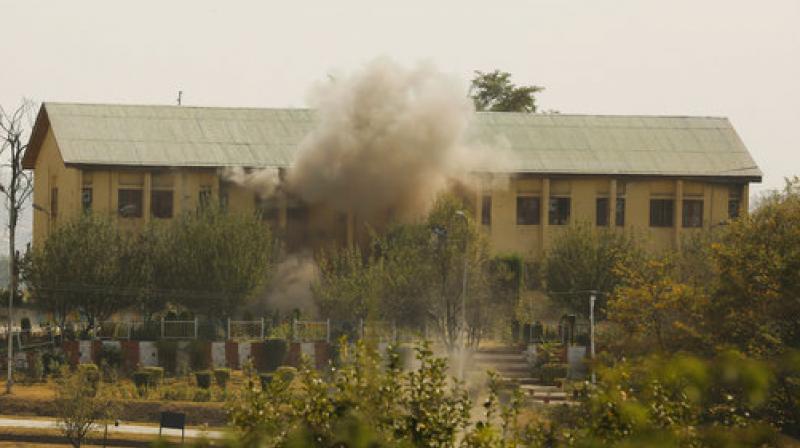 Jaish-e-Muhammad claimed the responsibility for carrying out attack at BSF camp at Humhama near the Srinagar Airport and Air Force Station. (Photo: PTI)

Srinagar: All the three gunmen were killed by the security forces in their ‘step-by-step- counter assault against a group of three Jaish-e-Muhammad (JeM) militants who had stormed a Border Security Force (BSF) camp at Humhama near the Srinagar Airport and the Air Force Station at dawn on Tuesday.

BSF confirmed that all the three terrorists involved in attack were killed.

Jaish-e-Muhammad while claiming responsibility for carrying out the attack has said that the members of its ‘Shaheed Afzal Guru squad’ did it.

He added, "We are looking for six to seven terrorists and we need to neutralise them very fast."

The IGP said that one ASI was also killed in the encounter.

He said, " Request media to be reasonable before running news, as such attacks will continue to happen as long as Pakistan is our neigbour."

Four others, including a Jammu and Kashmir policeman were injured in the initial militant attack and subsequent encounter.

The gunmen barged into the campus of the BSF’s 182 battalion at 4:30 am and took positions in administrative building and JCO Mess.

The police sources said the militants hurled hand grenades and simultaneously opened fire at the sentry posts to sneak inside the camp.

One of the three ‘fidayeen’ was gunned down at the main gate while two others managed to enter barrack number 07 of the camp and then moved to other buildings, the sources said.

The area, where the attack took place falls is an area of central district of Budgam which is considered as ‘most secured’.

While the Srinagar Airport and Air Force Station fall in close proximity of the BSF camp, other security forces including SOG and the CRPF too have their important installations and camps in the area.

Given the gravity of the situation, Union Home Minister Rajnath Singh called a high-level meeting on Tuesday to review the situation in Jammu and Kashmir in the aftermath of the attack on the BSF camp.

Flight operations at the Srinagar airport has resumed after cancellation of some of the morning flights.

“Morning flights were cancelled, However, Air Asia flight from Delhi landed at the airport at 10 am. Also, the passengers scheduled to fly out of Srinagar are being allowed to proceed towards the airport,” a police official said.

Earlier, groups of people chanting slogans hurled stones at the Jammu and Kashmir police and CRPF deployment and also forced the shopkeepers to drop their shutters nearby Ompora market but they were chased by the police, witnesses said.