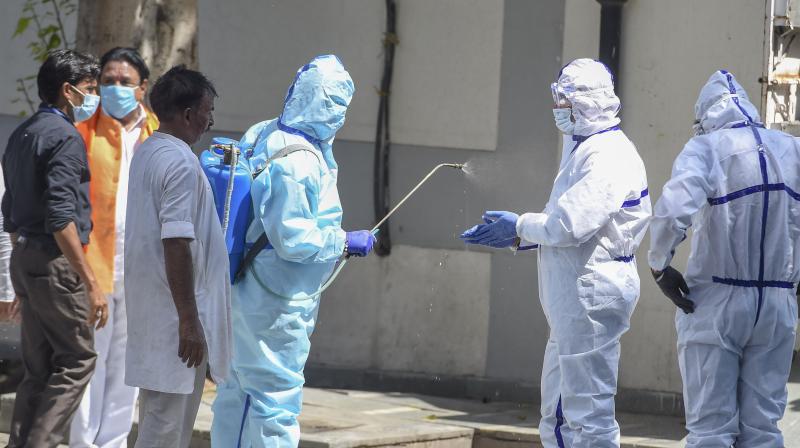 Army personnel being sanitised after the cremation of the former president Pranab Mukherjee, at Lodhi Road cremation ground in New Delhi. — PTI photo

The alarming spread of novel coronavirus in India is one of the fastest in the world right now as its overall cases now run close to 38 lakh. At this speed India will shortly beat Brazil to be number two in the world having the highest number of Covid-19 cases after the US which has 60.76 lakh cases till now. Brazil has 39.51 lakh cases, as per Johns Hopkins University bulletin.

Though as per official figures of the Union health ministry, overall cases till Thursday morning were 38,53,406 and deaths 67,376, COVID19India.org said that total cases were close to 38 lakh.

While Maharashtra (15,756), Andhra Pradesh (10,368) and Karnataka (9,058) continue to detect a high number of cases on a daily basis, Delhi on Wednesday reported a huge jump in fresh cases after nearly two months of control. Delhi Lt Governor Anil Baijal has ordered officers to ramp up the city's testing capacity by allowing testing on demand, having testing centres at all border entry points and at major construction sites to check the spread of Covid-19. All migrant workers coming to Delhi will now have to undergo tests.