China has illegally occupied around 8 km of Indian territory in the area between Finger 5 and Finger 8, source said 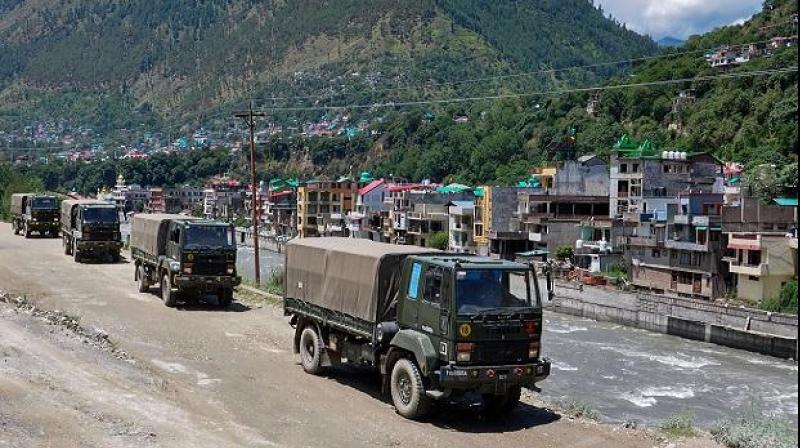 Army trucks move towards Ladakh in the midst of border stand-off. (PTI Photo)

The Indian Army has started repositioning its troops even in the “Finger area” on the northern banks of Pangong Tso in Ladakh to “up the ante” against the Chinese People’s Liberation Army which intruded into the area in early May.

This comes after India pre-empted PLA soldiers on the southern banks of Pangong Tso on Saturday night as Indian Army troops occupied many of the peaks there to dominate the area.

During the initial phase of disengagement, Chinese troops had moved its troops from the banks of Finger 4 to 5 on July 9 on the northern bank of Pangong Tso. But it continued to hold the ridgeline at Finger 4. With China refusing to vacate the entire Finger area during various diplomatic and military talks, India finally seems to have started firming up its positions.

“As part of the precautionary deployment carried out on 30 August, some readjustments of our positions on the north bank of Pangong Tso on our side of LAC had also been carried out,” a source said. China has illegally occupied around 8 km of Indian territory in the area between Finger 5 and Finger 8.

The Indian Army action comes even as Beijing is reportedly enraged that its local PLA commander had withdrawn forces when a physical conflict appeared imminent with Indian troops on Pangong Tso’s southern banks on Saturday night, where India blocked the Chinese Army and pre-emptively occupied the strategic heights in the area, according to US intelligence reports.

The Indian troops were better prepared to respond to the Chinese provocation after bolstering their presence following the deadly June clash in the Galwan Valley, according to a report published by US News, citing American intelligence sources. The report said Chinese President Xi Jinping would have to have known about each of the latest clashes in advance due to the nature of the Chinese military’s decision-making. Xi, besides being President, also heads the country’s Central Military Commission.

Since May, the Chinese Army strategy has been to grab unoccupied land at the Line of Actual Control in the Ladakh sector to change the status quo. However, on the southern banks of Pangong Tso, the Indian Army had information that the Chinese would try to occupy some of the peaks.

As soon as they saw a large number of Chinese troops moving towards the area, Indian troops late Saturday night and early Sunday morning occupied many of the peaks in the area in a “pre-emptive move”. The control of the peaks gives the Indian Army the advantage to dominate the area as it can monitor the movements of Chinese troops.