A health ministry spokesman said as of Sunday there had been nearly 200 confirmed cases of rat fever. 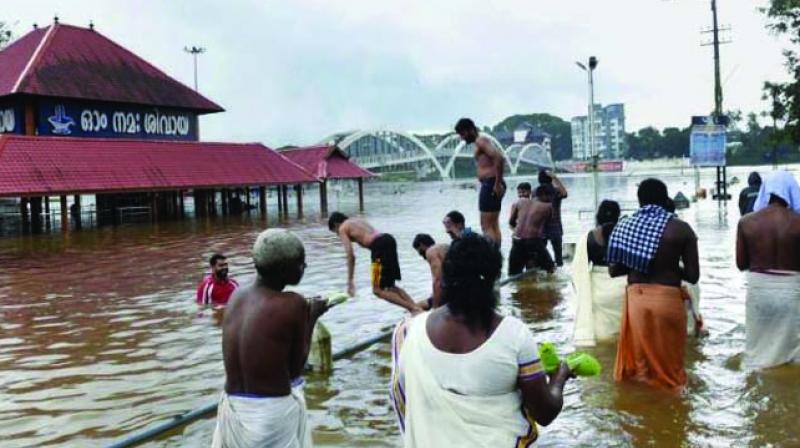 The massive floods kiled hundreds of people, destroyed thousands of homes and caused at least Rs 200 billion worth of damage. (Photo: File | AP)

New Delhi: Kerala is battling an outbreak of a bacterial disease that authorities suspect has killed dozens of people since mid-August after the worst flooding in a century.

A health ministry spokesman said as of Sunday there had been nearly 200 confirmed cases of what is locally called rat fever - the waterborne disease leptospirosis transmitted via the urine of infected animals, with symptoms including muscle pain and fever.

The surge in cases comes after torrential rain beginning on August 8 flooded almost the entire state, killing hundreds of people, destroying thousands of homes and causing at least rupees 200 billion (USD 2.81 billion) worth of damage.

The health ministry began distributing preventive medicine last month and warned about the outbreak of leptospirosis and other waterborne diseases such as typhoid and cholera, Health Minister KK Shailaja told reporters.

“The victims had unfortunately not taken preventive medicine,” the minister said.

Overall, nine deaths from the disease have been confirmed, but the number may rise to over 40 pending full medical reports, the ministry spokesman said.

Leptospirosis rarely spreads from person to person and can be treated with common antibiotics.

“In the past week, we have seen about 30 deaths in Kozhikode and Wayanad,” said Mohammed Javeed, internal medicine specialist at a private hospital in Kerala, referring to two of the worst flood-affected districts on the state’s southwest coast.

Javeed said the state has leptospirosis cases every monsoon season as paddy fields are filled with water, increasing the chance of infection for farmers, especially through wounds such as cuts.

Of particular concern, however, is that some of the victims this year did not have usual symptoms such as mild jaundice, blood in urine or bleeding spots on the skin, he said.

“This time it is a fast, progressive infection,” Javeed told Reuters. “The recent deaths indicate clearly the threat of an epidemic.”

Medical professionals are continuing to dispense preventive medicine in the form of tablets which need to be taken once a week for a month, Javeed said.