Relatives of victim refuse her to be shifted to Delhi. 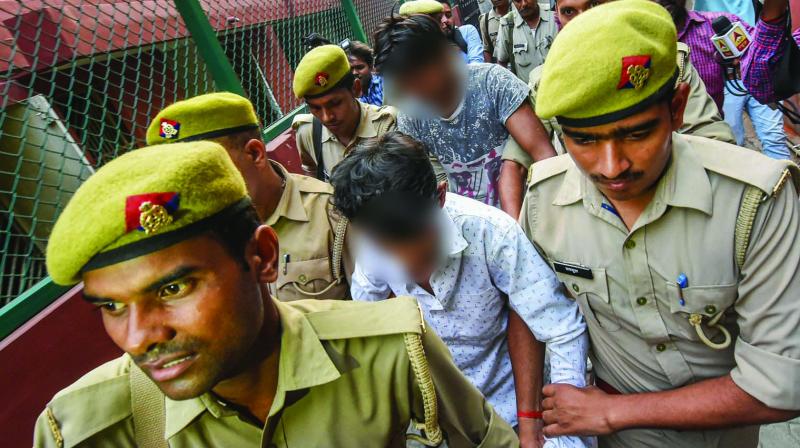 Police personnel take the driver and cleaner of the truck involved in the accident with the car of the Unnao rape survivor out of the CBI court in Lucknow on Friday. (Photo: PTI)

New Delhi: The CBI, probing the Unnao rape victim accident case, on Friday moved an application before a competent court to seek custody of the accused Kuldeep Singh Sengar, his brothers Atul Singh, Virendra Singh and Shailendra Singh. The application was moved before a trial court in Lucknow. Meanwhile, the CBI formed a 20-member additional special team to probe the case, agency spokesperson said here on Friday. In addition, six top forensic experts from Central Forensic Sciences Laboratory have already reached the crime scene, he said.

Sources said the forensic team took a Swift car, same as the victim was travelling in when the accident happened on Sunday, with it and recreated the crime scene. The 20-member special team will assist a five-member team in Lucknow which is already probing the case, the spokesperson clarified.

As far as CBI’s seeking custody of Sengar and others is concerned, sources in the agency said Sengar interrogation is crucial as he is the prime accused in the case. The CBI will also ask the court that it wants to examine the rape survivor’s uncle, the complainant in the case, who is currently in judicial custody. The CBI was given a day’s transit remand of the truck driver and the cleaner as well. On Thursday, the Supreme Court granted seven days to the CBI to conclude the investigation and had ordered transfer of the five cases related to the case to Delhi.

Meanwhile, the Supreme Court on Friday ordered immediate shifting of rape survivor’s uncle from Rae Bareli jail to Tihar jail and defers the decision of shifting the victim and lawyer to Delhi till Monday. Relatives of rape survivor and her lawyer also informed the apex court that their treatment could continue at Lucknow’s King George Medical College as of now.