However, emergency services to resume at AIIMS with immediate effect. 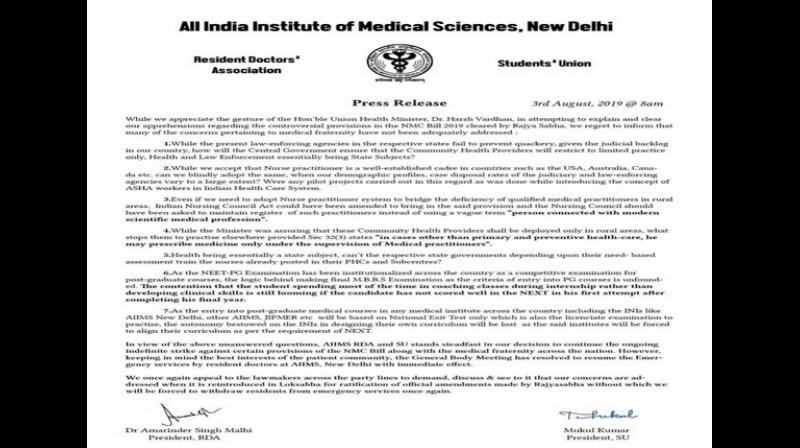 Resident Doctor's Association and Students' Union of All India Institutes of Medical Sciences (AIIMS), Delhi has announced that it will continue with its ongoing indefinite strike but would resume emergency services with immediate effect. (Photo: ANI)

New Delhi: Resident Doctor's Association and Students' Union of All India Institutes of Medical Sciences (AIIMS), Delhi has announced that it will continue with its ongoing indefinite strike but would resume emergency services with immediate effect.

A joint statement issued by Student Union president Mukul Kumar and RDA chief Amarinder Singh, said that keeping in mind the best interests of the patient community, the General Body Meeting has resolved to resume the emergency services by resident doctors, however, the strike against certain provisions of NMC Bill would continue along with the medical fraternity across the nation.

Asserting that concerns pertaining to medical fraternity have not been adequately addressed, they have appealed to lawmakers across party lines to demand, discuss and see that their concerns are addressed when the Bill is reintroduced in the Lok Sabha for ratification of official amendments by Rajya Sabha.

RDA has also stated that if it is not done, they will be 'forced' to withdraw resident doctors from emergency services once again.

We remain steadfast in our decision to continue ongoing indefinite strike against certain provisions of NMC Bill. However, emergency services to resume at AIIMS with immediate effect.

Doctors have shown dissatisfaction over the "ambiguity" of the bill as they are uncertain on the concept of National Exit Test (NEXT) and demolishing of NEET-PG.

Agitating doctors expressed concerns over the privatisation of medical education. "The Bill will give undue favours to the private medical colleges/unaided universities by decreasing the percentage of seats under the controlled fee structure from 85 per cent to 50 per cent" said doctors.