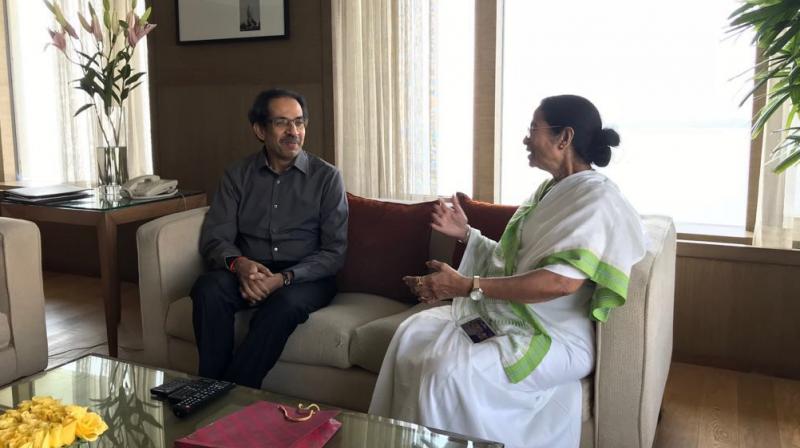 Mumbai: Shiv Sena chief Uddhav Thackeray will be participating in a mega rally to be organised by West Bengal Chief Minister Mamata Banerjee in Kolkata on January 19 next year.

The TMC chief extended an invite to Thackeray for the rally when she met Sena’s parliamentary party leader Sanjay Raut in New Delhi on Wednesday as part of her marathon meetings with Opposition leaders.

Raut told Banerjee that Thackeray would attend the event, a report in The Indian Express said quoting sources.

The mega rally is said to project Mamata Banerjee as the backbone of the anti-BJP alliance in the wake of 2019 Lok Sabha polls.

The relationship between the Shiv Sena -- an NDA constituent -- and the BJP has been witnessing turmoil in the recent past.

Sena abstained from voting when the Opposition took up the no-confidence motion against Prime Minister Narendra Modi-led government during the ongoing Monsoon Session of the Parliament.

The Sena decision, which came at the last minute, embarrassed the BJP.

Thackeray and Mamata Banerjee have maintained a regular contact since November 2016, when Sena MPs had joined her march from the Parliament House to the Rashtrapati Bhavan to protest against demonetisation of Rs 500 and Rs 1000 currency notes, The Indian Express report added.

Thackeray and his son Aditya had also met Banerjee when she visited Mumbai in November last year.